This squadron was re-established in 1754 as the Kurpfalz Dragoner with 3 companies taken from the Leib-Dragoner. It counted 174 men.

During the Seven Years' War, the chef of the squadron was the Pfalzgraf (Count Palatine) Friedrich Michael von Zweibrücken

The squadron was finally disbanded in 1770.

At the outbreak of the war in 1756, the regiment was garrisoning Ladenburg.

In 1757, the squadron was combined with the II./Prinz Friedrich Cavalry and III./Prinz Friedrich Cavalry to form the so called Kurpfalz Cuirassiers (aka von Hatzfeld Carabiniers). This regiment joined the Reichsarmee operating in Thuringia. In August, this army combined with a French contingent under the Prince de Soubise to form the Franco-Imperial army who proceeded to the invasion of Saxony. Soubise rated the various units of the Reichsarmee and considered the von Hatzfeld Carabiniers as "mediocre". On November 5, the regiment fought at the Battle of Rossbach where it deployed in the first line of the right wing under the Prince von Hohenzollern. The regiment suffered heavy losses during this battle.

On November 20 1759, as part of the Kurpfalz Cuirassiers, the squadron took part in the battle of Maxen where an Austro-Imperial Army captured the Prussian corps of Lieutenant-general Finck.

The first company wore red instead of white coats. 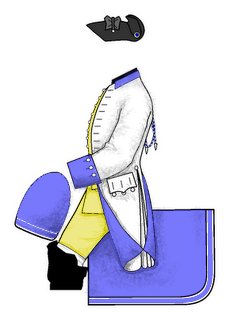 Uniform in 1754 - Source: rf-figuren from a Not By Appointment template

The uniforms of this squadron (date unspecified) kept in the collection of Ludwig IX of Hessen-Darmstadt show the following differences:

The kettle-drummers of the squadron wore the same uniform as the privates with the following exceptions: