Difference between revisions of "Ordenes Cavalry"

The origins of the regiment can be traced back to February 7 1640 when the Count de Monterey, the Count de Dastrillo and the Marquis de Castro-Fuerte circulated the news that the king was assembling a battalion of cavalry to serve on the frontier of Catalonia. On May 1, the Marquis de Mortara was appointed governor-general of the Caballería de las Ordenes.” By June 4, the unit counted 1,400 horse. In September, they were organised in four squadrons. On August 17 1642, the unit was designated as “Batallon de Caballeria de las Ordenes Militares”.

In 1652, the unit once more joined the Army of Catalonia and took part in the defence of Barcelona. In 1653, it participated in the relief of Gerona.

In 1662, during the Portuguese Restoration War (1640–68), the unit was transferred to the army assembling to march against Portugal. It took part in the capture of Borba and Jurumenha before retiring to Extremadura. In 1663, it took part in the siege and capture of Evora and in the combat of Estremoz. In 1664, it defended Extremadura. In 1665, it fought in the combat of Montesclaros.

In 1684, the unit was sent to Ampurdan and took part in the relief of Gerona.

In 1704, during the War of the Spanish Succession (1701–13), the unit was initially stationed in Extremadura. It was transformed into a regiment and marched against Portugal where it took part in the sieges of Salvatierra and Idanha-Nova and in the engagement of Monsanto. In 1705, it took part in an engagement at the fords of the Cinca, in the capture of Monroyo and Morella and in the blockade of San Mateo; in 1706, in engagements on the Sasadella and on the Cantaranas. The same year, it was renamed Ordenes Viejo to distinguish it from the newly created Ordenes Nuevo Cavalry. In 1707, the regiment took part in the Battle of Almansa, in the storming of Elche, in the second siege and capture of Alcira, in the second siege of Játiva, in the sieges of Denia, Lérida and Morella. In 1708, the regiment was sent to Catalonia where it took part in the sieges of Tortosa, Denia and Alicante. In 1709 it participated in the siege of the Castle of Alicante. In 1710, the regiment escorted the king to Lérida and took part in the unsuccessful siege of Balaguer, in the Battle of Almenar, in an engagement near Peñalva, in the Battle of Saragossa and in the victorious and decisive Combat of Villaviciosa. In 1711, it operated in Aragon to pacify the territory. In 1712, it operated against parties of migueletes. In 1714, the regiment was at the siege of Barcelona which was stormed on 11 September.

On 23 July 1715, when the Ordenes Nuevo Cavalry was disbanded , the present regiment was renamed Ordenes.

In 1717, the regiment embarked at Barcelona for Cádiz without its horses. In 1719, two mounted squadrons were assigned to the planned expedition against Scotland.

On November 14 1720, the entire regiment embarked for of Ceuta on the coast of North Africa which it brilliantly defended against the Moors. In February 1721, it returned to Spain.

On March 10 1734, during the War of the Polish Succession (1733–35), the embarked at Barcelona for the expedition against Tuscany where it fought in the Battle of Bitonto. It was then transferred to Sicily. In 1735, after the failure of operations in Sicily , it returned to Naples.. In 1737, it returned to Spain where it was quartered in Olot in Catalonia.

In 1741, during the War of the Austrian Succession, a squadron of the regiment marched to Dauphin/ where it joined an army assembling under the command of the Infante Don Felipe for the planned invasion of Savoy. In 1748, this squadron returned to Spain.

In 1762, the regiment was completely armed and mounted for the planned invasion of Portugal. From July 6 to August 25, it was at the Siege of Almeida. It then occupied the place after its surrender. 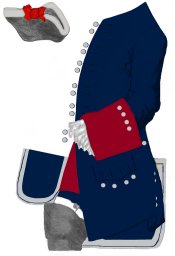 The standards of the regiment were made of crimson silk with silver cords and streamers. The centre device consisted of a cloak of the Order carrying the four crosses of Santiago, Alcántara, Calatrava and Montesa.