At the end of 1648, the regiment was recalled to France to quench the troubles of the Fronde (1648-1653). In 1649, it took part in the capture of Brie-Comte-Robert and in the siege of Condé; in 1650, in the defence of Mouzon and in the capture of Château-Porcien. In 1651, Mazarin increased his Italian regiment with 3 Corsican companies. Shortly afterwards, Mazarin had to leave France and the regiment was given to Philippe de France, Duc d'Anjou, Louis XIV's brother and, on April 24, took the name of “Anjou-Étranger”. From then on, the unit started to recruit in France (ten years later there remained hardly a trace of its Italian origins). The same year (1651), the regiment campaigned in Lorraine, participating in the siege of Chasté. In 1652, it was sent to Berry to submit places who had aligned with the Prince de Condé, and captured Montrond.

In 1653, the regiment was transferred to Catalonia where it took part in the siege of Girona and suffered heavily in the Combat of Bordilly. In 1654, it was re-established to 20 companies and participated in the siege of Villefranche and in the capture of Puygcerda. In 1655, it took part in the capture of Cap de Quiers; in 1656, in the storming of the Castle of Boraçan; in 1657, in the relief of Urgell. It then continued to serve in Catalonia until the Treaty of the Pyrenees in 1659.

In 1660, at the death of his uncle, Gaston de France, Philippe inherited the title of Duc d'Orléans. Accordingly, on April 12, “Anjou-Étranger” was merged with another regiment raised in 1647 and belonging to Philippe de France and received the title of “Orléans Infanterie”, a name that it retained during the entire “Ancien Régime”.

During peacetime, the regiment assumed garrison duties in Villers-Cotterets. In 1663, it was reduced to 6 companies. In 1666, it took part in the training camp at Compiègne.

In 1667, when the War of Devolution (1667–68) broke out, the regiment campaigned in Flanders where it took part in the siege of Lille. In 1668, it entered into Franche-Comté and captured Salins

After the peace, the regiment was reduced to 10 companies and was stationed in Alsace. In 1679, it took part in the affair of Minden.

By 1681, the regiment was assuming garrison duties in Brisach. It participated in the occupation of Strasbourg. In 1684, it was at the siege of Luxembourg.

In 1714, while most units of the French Army were enjoying the newly signed peace, the regiment returned to Catalonia where it took part in the siege and capture of Barcelona.

After the war, the regiment garrisoned Villers-Cotterets. In 1752, it was ntransferred to Orléans.

From March 30 to April 4 1758, after the retreat of the French army towards the Rhine, the regiment was in the first line of Clermont's Army in the camp of Wesel on the Lower Rhine. In April, when Clermont redeployed his army along the Rhine, the regiment was stationed in Kempen and Krefeld. After the successful crossing of the Rhine by Ferdinand's Allied army on May 31, the regiment retired towards Rheinberg where it joined Clermont's Army on June 2. It remained in this camp until June 12. It was placed in the centre of the second line. At 2:00 a.m. on June 12, a detachment of 300 men under Lieutenant-Colonel de Blot repulsed an enemy attack on the Abbey of Kamp launched from the Heights of Alpen. On June 23, the regiment took part in the Battle of Krefeld where it was placed on the right wing of the second line under Harvé. Its lieutenant-colonel, the Comte de Blot, and Major de Monnery were wounded during the battle. In Mid August, after Ferdinand's retreat to the east bank of the Rhine, the regiment, as part of the Army of the Lower Rhine now under Contades, recrossed the Rhine to follow the Allies. On August 20, it was encamped near Wesel where it was placed on the infantry right wing of the second line. 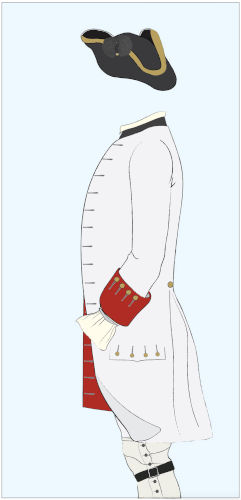