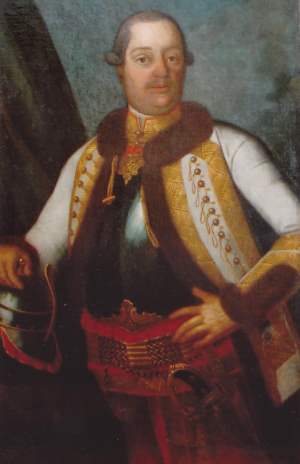 Rudolf was born on March 4 1719 in Vienna as the youngest son of Leopold Count Pálffy, colonel in the Austrian Army, and Maria Antonietta, born Countes Radouit Souches.

Rudolf's father died on March 27 1720 from old wounds received at the Battle of Höchstädt, so Rudolf became an orphan very young.

In September 1741, when the Hungarian Palatin Johann Count Pálffy had proclaimed the General Insurrection at the Diet of Pressburg (present-day Bratislava), Rudolf Pálffy was appointed lieutenant-colonel and assumed command of the troops of the Comitate of Pressburg. At the end of November, at the head of three companies of Portalisten from Pressburg and 150 Zipser horse. Rudolf was later attached to Bärenklau's Corps in Bavaria where he commanded the vanguard.

In February 1742, Rudolf distinguished himself at the combat of Landshut. After the signature of the Peace of Breslau, in June, Hungarian troops were released and Rudolf returned to his estates.

In January 1743, Rudolf Pálffy married Eleonora Countess Kaunitz-Rietberg, the sister of the State Chancellor Wenzel Anton Kaunitz. With this marriage, Rudolf was introduced into the highest circles at the court, a fact that favoured his further military career.

In 1744, when the Second Silesian War broke out, the Palatin once more called the Insurrection troops in the field. FM Joseph Graf Esterházy received overall command of these troops. Rudolf Pálffy joined Esterházy's staff with the rank of colonel. On August 18, he was once more appointed commanded of the troops of Pressburg. On October 21, he marched on Jablunka by Fulnek in Moravia, at the head of the first unit (800 horse, 300 foot and Raab Freikorps) of the Hungarian Corps. With this force, he then fought against the Prussians on the border between Moravia and Silesia.

At the beginning of 1745, several soldiers deserted his detachment and Rudolf Pálffy had momentarily to return to Pressburg to raise new recruits.

Rudolf Pálffy was then probably attached to the staff of FM Joseph Esterházy till the end of the Second Silesian War in 1745. There is no mention of him as an independent commander in the documents of the General Staff.

In 1747, Rudolf Pálffy returned to his estates in Western Slovakia.

After the outbreak of the Seven Years' War, in 1756, Rudolf Pálffy was assigned to the Austrian Army assembling in Bohemia where he belonged to the staff of FM Leopold Count Daun. On October 1, in the Battle of Lobositz, Rudolf Pálffy commanded a brigade (Paul Anton Esterházy Hussars, Baranyay Hussars and Jazygier-Kumanier Hussars) in Nádasdy's Corps.

In 1759 and 1760, Rudolf Pálffy acted as commander of light troops and distinguished himself on several occasions in the Klein Krieg. On May 29 1759, with the authorisation of Maria Theresa he became owner of the former Nagy-Károly Hussars.

His correspondence, preserved in the Slovakian State Archives in Bratislava, presents Rudolf Pálffy as one of the most trusted generals of this period, who also dealt with organizational measures for the army. In these functions, he often disagreed with General od Cavalry Hadik who had differing views.

In 1760, his health compromised by the rigours of campaigning, Rudolf Pálffy had to leave active service. He retired to his estates in western Slovakia. His main quarters were the parental Biberburg (present-day Cerveny Kamen) where he made major modifications during his life. The surrounding villages also contain several buildings erected by Rudolf Pálffy.

Rudolf Pálffy was hereditary captain of the Castle of Pressburg (present-day Bratislava) and Lord Lieutenant of the comitate of the same name.

Rudolf Pálffy died on April 1 (April 17 as per other sources) 1768 in Pressburg. His mortal remains reat in the crypt of the Pálffy family on the Franciscan Church of Malacky in Slovakia.