By an order dated January 18 1683, the 1,000 men strong regiment was divided in two units which were completed by new recruits to 800 men each. The proprietor of the second regiment (the later Erzherzog Ferdinand Cuirassiers) was Colonel Dupigny.

In 1716, during the Austro–Turkish War (1716–18), the regiment took part in the Battle of Peterwardein and in the siege of Temesvár; in 1717, in the Battle of Belgrade where Lieutenant-Colonel du Buissont distinguished himself and was promoted colonel.

In 1734, during the War of the Polish Succession (1733–35), the regiment served in Italy where it saw action at Parma, Quistello and Guastalla.

On July 22 1739, during the Russo-Turkish War (1735–39), the regiment took part in the Battle of Grocka where it was posted in the vanguard with Prinz Savoyen Dragoons and suffered heavy losses.

During the War of the Austrian Succession (1740–48), the regiment fought in the battles of Chotusitz, Hohenfriedberg and Soor (present-day Ždár/CZ).

In June 1756, at the beginning of the Seven Years' War, the regiment was stationed in Keszthely in Hungary and counted 771 men and 785 horses. On October 1, it took part in the Battle of Lobositz where it was deployed in the second line of cavalry of the left wing under Major-General Hedwiger.

On April 21, during the Prussian invasion of Bohemia, the 6 squadrons of the regiment fought in the Combat of Reichenberg where they were deployed on the left wing under FML Count Porporati. On May 6 1757, the regiment took part in the Battle of Prague where it was deployed in the Reserve in Argenteau's Brigade. During this campaign, Captain Wilhelm von Bourscheid, in his function as orderly officer of FM Daun distinguished himself on several occasions. On September 7, when General Nádasdy attacked Winterfeldt's isolated corps in the Combat of Moys, the regiment was part of Wollwrath's Cavalry Brigade which probably did not participate in the engagement.

In 1758, the regiment campaigned in Silesia. On September 20, as part of FZM Harsch's Corps, the regiment arrived in front of Neisse (present-day Nysa/PL) which was besieged. On November 5, Harsch lifted the siege of Neisse.

In 1760, the regiment was allocated to FM Loudon's Army. On June 23, it took part in the Battle of Landeshut. In July, it was present during the Siege of the Fortress of Glatz where Lieutenant-Colonel August Prince Hohenzollern-Hechingen distinguished himself. Prior to the Battle of Liegnitz, on August 15, the regiment was transferred Wolfersdorf's Corps and camped on the hills near Hochkirch.

In 1761, the regiment was camapaigned in Silesia as part of Loudon's Army. It was later instructed to join the Reichsarmee in Saxony.

In 1763, after the signature of the Treaty of Hubertusburg, the regiment returned to Hungary where it assumed garrison duty in the Komitat of Bars. In 1765, it was transferred to Slavonia (Vukovar and Požega). 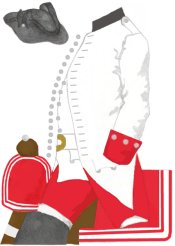 Donath gives a different lace for the saddlecloth and the sabretache: white with black hollow squares each containing a smaller solid black square.

The Albertina Handschrift shows a row of 14 pewter buttons (instead of 18).

The small flag attached to the trumpet was red with the arms of the house of Pálffy. The pattern of the apron of the kettle-drums is not known.