The unit consisted of 3 companies.

During the Seven Years' War, the commanders of the various companies were:

Throughout the war, a small body of the unit remained in the Palatinate territories on fortress duty.

In 1757, 200 men of the Palatine Artillery were part of the 6,000 men strong Subsidienkorps (Palatine Auxiliary Corps) hired by France to serve in Germany. They served the battalion guns (2 x 4-pdr battalion guns for each battalion). At the end of June, the Palatinate Auxiliary Corps advanced through Westphalia to join the French Lower Rhine Army commanded by maréchal d'Estrées. On July 26, this detachment took part in the battle of Hastenbeck where it supported the leading columns of the left wing. After the victory, it encamped at Grosselsen near Hameln with the main body of the French Lower Rhine Army from July 31 to August 2. At the end of the year, it took its winter quarters in the town of Detmold, Hamm, and Gütersloh; with the other regiments of the Palatine Auxiliary Corps. This position was in the fourth line of the French Army. The same year, 76 men (down to 44 by 1759) were also attached to the Imperial contingent who joined the Reichsarmee to serve the battalion guns of the Palatine contingent.

In 1758, when the comte de Clermont redeployed his army along the Rhine, part of the detachment was probably stationed in Düsseldorf or Julich. It remained in these towns even during the Allied campaign on the west bank of the Lower Rhine in June. On August 20, the detachment had joined the army of the Lower Rhine, now under the marquis de Contades, encamped near Wesel. At the beginning of October, part of the detachment was attached to Chevert's corps which was sent to reinforce the army of the prince de Soubise in Hesse. On October 10, it was at the battle of Lutterberg where it was part of Chevert's corps which won the day by turning the Allied left flank.

On January 1 1759, French subsidies not being renewed because the Palatine troops had proven to be quite unwilling allies to the French, the regiment returned to Palatinate.

Pengel and Hurt specify that the uniform had red lapels. 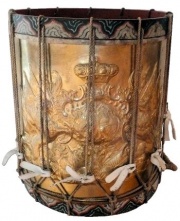 no information available yet about the uniform of drummers