The unit remained in the Palatinate and did not take part in the war. 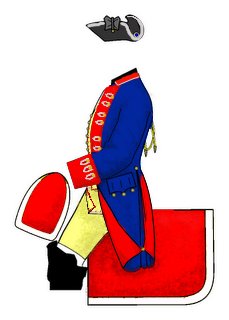 Uniform in 1761 - Source: rf-figuren from a Not By Appointment template

Troopers were armed with a straight bladed sabre (brass hilt), a carbine and 2 pistols

The trumpeters probably had silver trumpets decorated with silver cords and tassels.