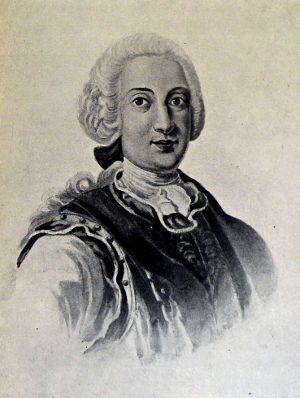 Gianluca Pallavicini-Centurioni belonged to a family of Italian high aristocracy from the region between Parma and Piacenza. He was born on November 23, 1697 in Genoa. His father was Giuseppe Pallavicini; his mother, Livia d’Ottavio Oltremarion. From her, Gianluca got the surname from her albergo (family clan), the “Centurioni”.

Already as young men, Gianluca assumed several functions in the administration of the Republic of Genoa.

In 1729, during the uprising of Corsica, the government of Genoa asked Emperor Charles VI for assistance against the rebels who were supported by Spain and France. In connection with these diplomatic negotiations, Gianluca went to Vienna as Genoese agent.

In 1733 Gianluca entered into the Imperial service, he was responsible for the naval forces in Istria with the rank of admiral. During the War of the Polish Succession (1733-1735) Gianluca was commander of the galleys of Naples. After loss of the Kingdom of Naples, Gianluca organized the Danube naval forces, till 1735, at his own expenses.

On April 5, 1735, Gianluca was promoted to General Feldwachtmeister (major-general). On April 10, 1736, he became Inhaber (proprietor) of the former Imperial Infantry Regiment Jung-Lothringen (I. R. No. 3) which he exchanged the same year against the former Imperial Infantry Regiment Lothringen (I. R. No. 15 of which he would remain proprietor till his death in 1773).

Major-General Pallavicini-Centurioni was promoted to commander of Danube naval forces during the last Turkish War (1737–1739). In 1738, he led eight galleys on Danube River against the Turkish Danube Fleet. The same year, he was sent to Genoa to arrange a loan of 600,000 florins. He himself contributed 200,000 florins.

On March 28, 1741, at the beginning of the War of the Austrian Succession (1740-48), Pallavicini-Centurioni was promoted to Feldmarshall Lieutenant (FML). In 1742, he led the siege of Mirandola and, in 1743, fought in the Battle of Campo Santo. In 1744, Pallavicini led an Austrian corps which supported the Sardinian army in Piedmont. His infantry regiment was attached to this corps and, on September 30, took part in the Battle of Madonna dell'Olmo. In 1745, Gianluca was sent to Genoa in the function of Privy Councillor and Plenipotetiarius of Lombardy. On April 22, 1746, at the head of Imperial troops (including his own regiment), he captured the Castle of Parma. On June 16 of the same year, in the Battle of Piacenza, he led the right wing of the army. Two months later, on August 10 at the Battle of Rottofreddo, Pallavicini was wounded at the head by a bullet. In 1747, Pallavicini-Centurioni ceded his function of governor of Lombardy, which he had assumed since 1745, to Count Harrach.

In August 1753, Pallavicini-Centurioni remarried with Katharina Fava di Ferro, widow of Marchese Conradini. On November 30 of the same year, he was accepted as knight in the Order of the Golden Fleece.

In September 1765, Pallavicini-Centurioni was appointed president of the Council of Milan, a function he retained until 1768.

In 1768, Count Pallavicini accompanied Archduchess Maria Carolina on her journey to Sicily.

In Bologna, Count Pallavicini was renowned as a remarkable mécène. In 1770, he supported the family of Wolfgang Amadeus Mozart and recommended him to Cardinal Lazzaro Pallavicini in Rome.

His second wife was since August 1753 Katharina Fava di Ferro, widow of Marchese Conradini. On January 24, 1756 in Genoa, a son was born from his marriage with Katharina Fava di Ferro. His son Karl, would reach the rank of major-general and would be decorated with the Knight Cross of the Maria Theresia Order.