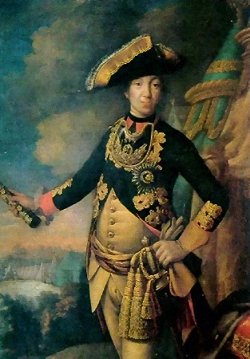 Painting of Peter III of Russia by Alexei Antropov in 1762 - Source: Wikipedia

Karl Peter Ulrich was the only son of Karl Friedrich, Duke of Holstein-Gottorp and of Anne Petrovna, eldest surviving daughter of Peter the Great. Until his adoption by Elizabeth Petrovna, he lived at the court of Holstein.

In December 1741, Karl Peter Ulrich was adopted by his aunt, Elizabeth Petrovna, as soon as she was safely established as Empress of Russia.

On November 18 1742, Karl Peter Ulrich was received into the Orthodox Church, exchanging his original name for that of Peter Fedorovich.

On August 21 1745, by the command of his aunt, Peter married Princess Sophia Augusta Frederica of Anhalt-Zerbst, who exchanged her name for that of Catherine Aleksyeevna. Their tastes were divergent and their tempers incompatible.

On January 5 1762, Peter succeeded his aunt Elizabeth Petrovna as Peter III. His immediately proclaimed an amnesty for the statesmen arrested or exiled by Elizabeth after her accession. His foreign policy was the absolute reversal of the policy of his predecessor. At the end of February, he made pacific overtures to the almost vanquished King Frederick II of Prussia, whom he habitually alluded to as "the king my master." On May 5, Peter's enthusiastic worship of Frederick II resulted in a peace. On June 19, he even entered into an offensive and defensive alliance with Prussia whereby Peter restored to Prussia all the territory won from her by Russia during the last five years. Peter III then sent a series of menacing letters to the Court of Vienna, threatening to attack Austria unless it complied with all the demands of the King of Prussia. On July 6, Peter III ordered the Russian army to invade Denmark by way of Mecklenburg. This conflict was due to the refusal by Denmark of the terms to be submitted by Russia to a peace conference to meet at Berlin for the purpose of adjusting the differences between the two powers.

Meanwhile, Peter III paid off all the debts that his wife Catherine had contracted as soon as he acceded to the throne. On her birthday, in April, he made her a present of large domains though he had already readjusted her establishment on a truly imperial scale. Meanwhile Peter III had a liaison with Countess Elizabeth Vorontsova who was invited to the Winter Palace. Catherine accepted it as a matter of course. She had her own love affair with the young guardsman, Gregory Orlov. However, Catherine soon resolved to snatch the reins of government from the hands of Peter III.

On July 9 1762, Catherine led a coup d'état against Peter III. Immediately after his surrender, Peter was removed to Ropshinskyi Castle. Catherine then sent messengers to stop the advance of the Russian army against Denmark. When these messengers finally reached their destination, the opposing forces were almost within touch of each other.

Peter was kept prisoner at Ropshinskyi Castle from July 9 to July 18. At first Catherine and her counselors could not make up their minds what to do with "the former emperor". They initially considered imprisoning him for life in the Fortress of Schlüsselburg or repatriating him to Holstein. However, these alternatives were both considered as too dangerous. The Orlovs had even stronger motives than Catherine herself for suppressing the ex-emperor. With the elimination of Peter, Gregory Orlov could aspire to marry Catherine, thus becoming emperor. Finally, on the afternoon of July 18, Peter III, along with his consort's connivance, was murdered at Ropshinskyi Castle by Alexius Orlov, Theodore Baryatinski and several others.