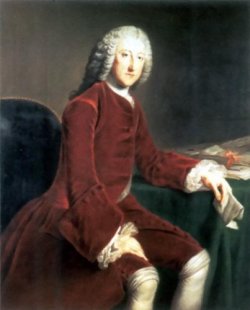 William Pitt was the younger son of Robert Pitt of Boconnoc, Cornwall, and grandson of Thomas Pitt, governor of Madras (present-day Chennai).

In January 1727, William Pitt was entered as a gentleman commoner at Trinity College, Oxford. The same year, his father died.

In 1728, Pitt left the university without taking his degree. He then took a place at the University of Utrecht.

In 1731, on his return home, William Pitt chose a career in the army. Through the interest of his friends, he obtained a cornet's commission in Cobham's Regiment (the King's Own Regiment of Horse), but the political career soon attracted him.

In 1733-34, Pitt undertook a "grand tour" but visited only France and Switzerland.

In April 1736, Pitt delivered his maiden speech. He soon became a critic of the government and Walpole thought fit to punish him by procuring his dismissal from the army.

In 1737, since the Prince of Wales was the patron of the opposition, Pitt became his groom of the bed-chamber. In this new position, his hostility to the government did not relax.

In 1742, Pitt was in favour of the motion for an investigation into the last ten years of Walpole's administration. The same year, Walpole was at last forced to succumb to the long continued attacks of opposition and was succeeded as prime minister by the Earl of Wilmington, though the real power in the new government was divided between Carteret and the Pelhams.

In 1744, when the Pelhams formed a new administration after the dismissal of Carteret, Pitt did not obtain a place even in a subordinate office. In October, the eccentric Duchess of Marlborough left him a legacy of £10,000 at her death.

In February 1746, the king finally consented, with no very good grace, to give Pitt a place in the government as vice-treasurer of Ireland. In May, Pitt was promoted to the office of paymaster-general which gave him a place in the Privy Council. In this office he displayed his public spirit and integrity in a way that deeply impressed both the king and the country.

In 1747, Pitt sat at the parliament for the district of Seaford.

The administration formed in 1746 lasted without material change till 1754. During this period, Pitt supported measures such as the Spanish treaty and the continental subsidies, which he had violently denounced when in opposition, in order to conciliate the favour of the king.

In 1754 Henry Pelham died and was succeeded at the head of affairs by his brother, the Duke of Newcastle. To Pitt the change brought no advancement and he continued at his post. The same year, at the general election, he accepted a nomination for the duke's pocket borough of Aldborough. Newcastle entrusted the management of the Commons to Sir Thomas Robinson. After the election, Pitt began to make frequent and vehement attacks on Newcastle himself while still continuing to serve under him. The same year, Pitt married Hester Grenville, sister of Earl Temple and George Grenville.

In November 1755, Pitt was dismissed from office after speaking against a new system of continental subsidies, proposed by the government of which he was a member. Meanwhile Fox retained his appointment as secretary of state. This gave rise to a rivalry between Fox and Pitt.

In December 1756, now seating for Okehampton, Pitt became secretary of state and leader of the Commons under the premiership of the Duke of Devonshire. However, the king remained unfriendly to him and Newcastle's influence remained dominant in the Commons.

In April 1757, Pitt was again dismissed from office on account of his opposition to the king's continental policy. However, he retained public support. Accordingly, a political deadlock ensued for which relief could only be had by an arrangement between Newcastle and Pitt. After much negotiations, an agreement was found in June whereby Newcastle would be the nominal and Pitt the virtual head of the government. On his acceptance of office, Pitt was chosen member for Bath.

This administration continued in power till 1761. During these four years, Pitt identified with the great events which make this period. In the general opinion of his contemporaries, the whole glory of these years was due to his single genius. It was his discernment that selected Wolfe to lead the attack on Québec. Pitt had personally less to do with the successes in India than with the other great enterprises that shed an undying lustre on his administration, but his generous praise in parliament stimulated the genius of Clive. Pitt has been the first real Imperialist in modern British history. He was the directing mind in the expansion Great Britain and with him the beginning of empire is rightly associated. The Seven Years' War might well have lasted much longer if Pitt had not subsidized Frederick II of Prussia and relieved him of the task of defending Western Germany against France. The victorious policy of Pitt deprived France of the lead in the councils of Europe which she had hitherto arrogated to herself and so affected the whole course of continental politics.

On October 25 1760, King George II died and his grandson acceded to the throne as George III. The new king had new counsellors of his own, the chief of whom, Lord Bute, was at once admitted to the cabinet as a secretary of state. Bute and Pitt soon differed on the politic to adopt towards Spain. Pitt urged that the offensive alliance of the Bourbons of France and Spain should be met by an immediate declaration of war with Spain while Bute disagreed with this politic. Bute's refusal was endorsed by all his colleagues save Temple, and Pitt had no choice but to leave the cabinet.

Accordingly, in October 1761, Pitt resigned. The king urged him to accept some signal mark of royal favour in the form most agreeable to himself. Therefore, Pitt obtained a pension of £3,000 a year for three lives, and his wife, Lady Hester Grenville, whom he had married in 1754, was created Baroness Chatham in her own right.

Pitt's conduct after his retirement was distinguished by moderation and disinterestedness. The war with Spain, in which he had urged the cabinet to take the initiative, proved inevitable and Pitt spoke in support of the government measures for carrying on the war.

In December 1762, when the terms of the intended Treaty of Paris were discussed in parliament, Pitt, though suffering from a severe attack of gout, was carried down to the House. He spoke for three hours, protesting against its various conditions. He considered these terms quite inadequate to the successes that had been gained by the country.

In 1763, Pitt spoke against the tax on cider, imposed by his brother-in-law, George Grenville. However, his opposition was unsuccessful in the House even if it helped to keep alive his popularity with the country.

In 1764, when the question of general warrants was raised in connection with the case of Wilkes, Pitt vigorously maintained their illegality, thus defending at once the privileges of Parliament and the freedom of the press.

During 1765, Pitt seems to have been totally incapacitated for public business.

In 1766, Pitt supported with great power the proposal of the Rockingham administration for the repeal of the American Stamp Act, arguing that it was unconstitutional to impose taxes upon the colonies. He thus endorsed the contention of the colonists on the ground of principle, while the majority of those who acted with him contented themselves with resisting the disastrous taxation scheme on the ground of expediency. But the House of Commons repudiated in the most formal manner the principle Pitt laid down. In July, Rockingham was dismissed and Pitt was entrusted by the king with the task of forming a government entirely on his own conditions. Pitt chose for himself the office of lord privy seal, which necessitated his removal to the House of Lords. In August, Pitt became Earl of Chatham and Viscount Pitt. By the acceptance of a peerage Pitt lost at least as much and as suddenly in popularity as he gained in dignity.

One of the earliest acts of the new ministry was to lay an embargo upon corn to prevent a dearth resulting from the unprecedentedly bad harvest of 1766. Meanwhile, Pitt's attention was increasingly directed to the growing importance of the affairs of India. During this period, Pitt seems to have been freed for a time from the pangs of gout only to be afflicted with a species of mental alienation bordering on insanity.

In 1767, the imposition of the import duty on tea and other commodities was the project of Charles Townshend. It was carried into effect without consultation with Pitt who did nothing to remove existing difficulties with the American colonies and remained passive while his colleagues took the fatal step which led directly to separation.

In October 1768, Pitt tendered his resignation on the ground of shattered health. Soon after his resignation a renewed attack of gout freed Pitt from the mental disease under which he had so long suffered.

In July 1769, after nearly two years and a half in seclusion, Pitt again appeared in public at a royal levee.

In 1770, Pitt resumed his seat in the House of Lords where he opposed the government policy in the contest with America.

On April 7 1778, Pitt appeared at the House of Lords on the occasion of the Duke of Richmond's motion for an address praying the king to conclude peace with America on any terms. Pitt declaimed for a considerable time against the motion. After the Duke of Richmond had replied, he rose again excitedly as if to speak, pressed his hand upon his breast, and fell down in a fit. He was removed to his seat at Hayes.

This article incorporate texts from the article "Pitt, William" of the Encyclopædia Britannica (11th ed. London: Cambridge University Press, 1911), a publication now in the public domain.

A Web of English History