This Swiss regiment was raised according to a warrant issued on January 28, 1677 during the Franco-Dutch War (1672-78), under the name of “Stuppa-Jeune”, in Marseille. It initially consisted of eight free companies for a total of 1,600 men and was immediately sent to Sicily to fight the Spaniards. The same year, it took part in the defence of Taormina. In 1678, it returned to France where it received four additional companies. Its twelve companies were then organised in three battalions. It was then sent to Flanders where it took part in the blockade of Mons and in the Battle of Saint-Denis.

In 1684, the entire regiment took part in the passage of the Ter, in the storming of Girona and in the investment of Cap de Quiers. It then returned to Roussillon. In 1686, it was transferred to Châlons, then to Arras, Le Quesnoy and Philippeville.

In 1700, the regiment was stationed in Dunkerque and Furnes.

In 1715, the regiment was reduced to two battalions. In 1716, it was stationed in Rocroi, Philippeville and Givet.

In 1733, during the War of the Austrian Succession (1733-35), the regiment, now known as “Bezenwald Infanterie” was charged to guard the northern frontier between the coast and the Meuse. It was increased to four battalions.

In June 1736, the regiment was sent to Versailles to work at the embellishment of the domain. In October it returned to Saint-Omer . On January 8, 1737, it was reduced to two battalions. In 1738, it was transferred to Lille.

In 1742, during the War of the Austrian Succession (1740-48), the regiment, now known as “La Cour-au-Chantre” was at the camp of Dunkerque and was destined to the planned expedition against Scotland. On September 22, 1743, the regiment was increased to three battalions. In 1744, the regiment took part in the covering of the sieges of Menin, Ypres and Furnes; in 1745, in the siege of Tournai, remaining there to guard the trenches during the Battle of Fontenoy, and in the sieges of Oudenarde, Ostend and Nieuport; in 1746, in the conquest of Dutch Flanders and in the capture of the Citadel of Antwerp and of the castles of Namur, and in the Battle of Rocoux. In 1747, the regiment was at the Battle of Laufeld but was not involved in fighting; it then took part in the capture of Berg-op-Zoom. In 1748, it was at the siege of Maastricht.

In 1755, the regiment took part in the training camp of Richemont on the Moselle.

On the eve of the Seven Years’ War, the regiment, now known as “Planta Infanterie”, counted two battalions and had prévôté (provostship).

During the Seven Years’ War, the regiment ranked 63rd and was under the command of:

Somewhere between August 23 and September 6, 1757, the regiment joined the Army of Saxony, led by the Prince de Soubise, in the area of Erfurt and Eisenach for the planned reconquest of Saxony. On September 27, it was brigaded with Diesbach Infanterie and Rohan Montbazon Infanterie under the Marquis de Custine in the second line of the left wing of the Franco-Imperial Army. On November 5, the regiment was at the disastrous Battle of Rossbach where it formed a brigade along with Reding Infanterie in the first line of the centre. The regiment suffered heavily in this battle: Lieutenant-Colonel d'Arbonnier was wounded and taken prisoner with the battalion commandants Jossaud and Arder, Aide-Major Wielandt, Captains Grenut, Affleger, Turtin, Gallatin, Bertenschalz, Bouscard, Faller and six lieutenants. At the end of the year, the regiment took up its winter-quarters in Berka and Vacha on the Werra River near Eisenach in Hessen.

In April 1758, when the Comte de Clermont redeployed his army along the Rhine, the regiment was stationed in Nierst, Langstkierst and the villages vis à vis Kaiserswerth/Düsseldorf. On May 31, when Ferdinand of Brunswick successfully accomplished the crossing the Rhine with an Allied army, the regiment had already left the Lower Rhine theatre of operation and was on its way to Hesse to reinforce Soubise's Army. On October 10, it took part in the Battle of Lutterberg where it was placed in the centre of the first line.

On April 12 1759, during the Allied spring offensive in Western Germany, the Duc de Broglie's Army bivouacked near Bergen. He immediately deployed the regiment in the orchards near the village. On April 13, the regiment took part in the Battle of Bergen where it formed part of the first line of the right wing under the command of Prince Camille de Lorraine. The regiment was among the infantry entrenched in the village of Bergen. Around 10:00 a.m., it was heavily involved in a fire fight against the Allied units advancing against Bergen and drove them back. In June, at the beginning of the French offensive in Western Germany, the regiment was part of the “Right Reserve” under the command of the Duc de Broglie who had taken position at Friedberg in Hesse. On August 1, the regiment took part in the Battle of Minden where it was deployed in the first line of Broglie's Corps. On October 19, the regiment was part of the force sent by Contades to reinforce d'Armentières on the Lower Rhine.

By May 23 1760, the regiment was part of the Reserve of the second line of Broglie's Army, placed under the command of M. d'Auvet. On June 15, the regiment was at Ratingen and Mettmann. On July 31, the regiment took part in the Battle of Warburg where it was deployed in the first line of the left wing. On October 3, Lochmann Infanterie and Planta Infanterie made an unsuccessful attempt to reinforce Wesel. At the end of October, the regiment, who had heavily suffered in front of Wesel, was sent back to France.

In 1761, the regiment was attached to the Army of the Lower Rhine. By November, it was posted in the district of Gueldre along the Meuse from Venlo to the Country of Kleve and along the Niers 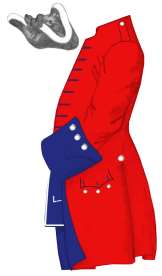 Under the command of Planta, the colours were:

N.B.: the Manuscript of 1757 illustrates an ordonnance colour quite similar to the one described for d'Arbonnier.

Under the command of d'Arbonnier, the colours were: