The regiment was created on August 1 1743 with 2 squadrons contributed by Bercheny Hussards. As per a decree dated December 10 1743, 12 companies of 50 men each were recruited in Swabia.

During the War of the Austrian Succession, the regiment initially served on the Rhine in 1745. In 1746, it campaigned in Flanders where it distinguished itself at the battle of Rocoux on October 11. On July 2 1747, it took part in the battle of Lauffeld. At the end of the war, on November 3 1748, the regiment was reduced to 4 companies.

On October 30 1756, the regiment received part of the troops of the disbanded regiment “Ferrary Hussards”. It then counted 4 squadrons.

On May 5 1758, the regiment was disbanded because of the plundering and robberies perpetrated against the German Allies of France. Two of its squadrons were incorporated into Bercheny Hussards, the two other ones into Turpin Hussards.

In 1757, as part of the army of the Lower Rhine, the regiment was among d'Estrées' light troops for the planned invasion of Hanover. On July 26, the regiment took part in the battle of Hastenbeck. At the end of the year, it took its winter quarters in the first line of the French Army, in an advance position in front of Celle (Zell) on the Aller River.

On February 23 1758, the regiment was attacked by surprise by Prussian hussars in its cantonments at Stöcken-Drebber. The regiment lost 3 officers and 50 men killed; its colonel, 4 officers and 130 privates taken prisoners; 10 standards, 1 pair of kettle-drums and 300 horses captured. In April, when the comte de Clermont redeployed his army along the Rhine, the regiment was stationed in Wesel. On May 5 of the same year, the regiment was disbanded for misconduct. 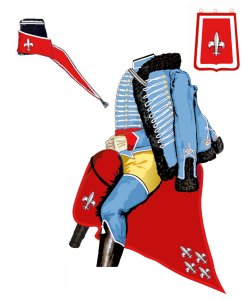 N.B.: for this uniform we have tried to follow closely the description contained in the 1752 ordonnance, to the exception of the mirliton which Pétard and Funcken specifies to be black from 1755.

The regiment had 2 swallow-tailed silken guidons.