The regiment was raised in 1745 in the Marienburg area [the Teutonic Order's Castle of Marienburg in Poland] by Colonel von Wilmsdorf and soon later employed along the Silisian border.

By 1754, the regiment garrisoned Biezun.

At the outbreak of the Seven Years' War, in 1756, the regiment consisted of 4 squadrons, each of 2 companies, for a theoretical total of some 762 men.

Throughout the Seven Years' War, the Chef of the regiment was Lieutenant-General Prince Albrecht of Saxony and Poland, Duke of Sachsen-Teschen.

During the Seven Years' War, the effective Kommandeur of the regiment were:

In 1756, during the invasion of Saxony by the Prussians, the regiment was stationed around Kraków in Poland. By October 11, it counted 544 men and 510 horses. Being stationed in Poland, it avoided the fate of the Saxon units captured at Pirna who were forcefully incorporated into the Prussian service. In November, a few days after his arrival in Warsaw, the Elector of Saxony opened negotiations with the Court of Vienna about the use of his 6 remaining cavalry regiments stationed around Krakau (present-day Kraków) in Poland in conjunction with the Austrian army. An agreement was soon reached with Maria Theresa. On November 15, the regiment set off from from Krakau for Hungary. It took its winter-quarters in the Comitates of Neutra (present-day Nitra/SK) and Trentschin (present-day Trenčín/SK).

In 1757, the regiment served with the Austrian army, a situation which persisted till the end of the war. On May 15, it joined Daun's Army to the south of Kolin. It was then attached to General Nádasdy's Corps, posted at Maleschau south of Kolin. On June 13, the regiment (to the exception of its carabinier company under Major-General von Zezschwitz who remained with the Austrian main army) was involved in a skirmish with Prussian troops near Maleschau (present-day Malešov/CZ), driving the Prussians out of Kuttenberg (present-day Kutná Hora/CZ). On June 18, the regiment took part in the Battle of Kolin where it was deployed in the first line of the extreme right wing in Morocz's Division. At the end of the afternoon, as Wied's Austrian Division was wavering in front of Hülsen and Tresckow attacks, the Saxon Chevauxlegers along with the Ligne Dragoons and the Kommandierten cavalry (converged companies) fell of the right flank on the exposed Prussian corps. They broke Hülsen's cavalry and threw his infantry into confusion. Wied's infantry division rallied and the Austrian and Saxon cavalry attacked again. Hülsen's infantry was broken and formed squares. After a short fight, the Austrians captured 14 Prussian battalions along with all their guns. After this battle, the regiment as part of Nádasdy's Corps followed the Prussians up to Leitmeritz (Litoměřice/CZ). At the end of July, the corps reached Tetschen (present day Děčín/CZ). Around mid August, the corps joined to the main army in the region of Herwigsdorf near Zittau. On September 7, when G.d.C. Nádasdy attacked the isolated Prussian Corps of Winterfeldt in the combat of Moys, the regiment was deployed in the second line of the right wing under Major-general Gosenitz. In October and November, the regiment was present at the siege of Schweidnitz where it was deployed from the Stream of Weistrity (Bystrzyca) to Zülzendorf (Sulislawice). On November 22, the regiment took part in the Battle of Breslau where it was deployed in the first line of the cavalry left wing of Nádasdy's Corps. On December 5 at the battle of Leuthen, the regiment was part of the cavalry vanguard detached at Borne under Marshal Nostitz which was attacked and driven back on the Austrian right wing by the Prussian vanguard. The regiment was then sent to the left flank and took position behind the Württemberger and Bavarian contingents and fought against the Prussian cavalry when these contingents were routed. Nostitz was mortally wounded and taken prisoners during the combat. After this disastrous battle, the regiment retired to Sternberg (present-day Sternberk/CZ) in Moravia. Major-General von Monro became interim commander of the 3 Chevauxlegers regiments.

After the death of Nostizt in captivity (January 7 1758), Major-General von Zezschwitz was promoted lieutenant-general and commander of all 4 Saxon cavalry regiments. In early May 1758, during the Prussian invasion of Moravia, the regiment was part of the cavalry corps of De Ville which had taken position at Wolschan (present-day Olšany). On May 5, Frederick advanced against this corps, forcing it to retire beyond the defile of Predlitz. After the relief of Olmütz, the regiment was part of the troops who followed the retreating Prussian army up to the border of Bohemia. The regiment was then transferred to de Ville's Corps stationed near Troppau (present-day Opava/CZ). It served with this corps until September when it was transferred to Harsch's Corps who tried to capture the Fortress of Neisse. However, Frederick came to the relief of his fortress and Harsch was forced to retire to Moravia. The regiment took its winter-quarters around Teschen (present-day Cieszyn/PL).

At the beginning of 1759, the regiment counted between 807 and 813 men. In April, it was part of the Austrian forces who advanced against Fouqué's Corps posted near Heidenplitsch (present-day Bílčice/CZ), driving him back to Zuckmantel (present-day Zlaté Hory/CZ). The corps then encamped between Troppau (present-day Opava/CZ) and Jägerndorf (present-day Krnov/CZ). On 1 June, a part of de Ville's Corps (including the Saxon Chevauxlegers) went to Johannisthal (present-day Janoušov/CZ). In July, de Ville's Corps was sent to Bohemia to defend the country against General von Wedell who already occupied Trautenau (present day Trutnov/CZ). De Ville's and Harsch's corps then made a junction near Trautenau and marched on Landeshut in Silesia, the Saxon cavalry under Major-General Zezschwitz forming the vanguard. On 18 July, their camp at the Grüsau Monastery (present day Krzeszow/PL) was attacked by Fouqué's troops who were driven back. After some skirmishes, Harsch and de Ville returned to Trautenau. De Ville then marched to Saxony, leaving the Saxon cavalry with Harsch's Corps posted in the Riesengebirge (present-day Krkonoše/CZ). At the end of November, FML Daun recalled the Saxon cavalry to Saxony. The regiment marched by Schlukenau (present-day Šluknov/CZ) and Neustadt. It took its winter-quarters near Stolpen in Saxony.

In early June 1760, the regiment was attached to FZM Lacy's Corps operating on the east bank of the Elbe. The Saxon cavalry concentrated near Meissen on the east bank of the Elbe before moving to Radeberg. The Saxon Chevauxlegers then encamped at Königsbrück. Lacy then marched towards Silesia closely followed by Frederick who turned back near Bautzen, heading towards Dresden. On July 9 at 1:00 a.m., Lacy left Göda. He first retreated to Bischofswerda, then westward at an extraordinary rate, hurrying towards Dresden and the Reichsarmee. Lacy finally halted on the Height of Weissenhirsch, within 3 km of Dresden. Frederick marched by Bischofswerda to Harta (probably Grossharthau). He vainly sent his cavalry to catch up with Lacy. Frederick then undertook the Siege of Dresden but had to abandon it. Both armies marched towards Silesia again. On August 15, at the Battle of Liegnitz, the regiment was with the Austrian main army who did not take part in any action. On September 17, the regiment was present at the Combat of Hochgiersdorf. In October, the regiment took part in the Austro-Russian raid on Berlin in Zezscwitz's Corps. In the evening of October 11, Lacy evacuated Berlin and marched towards Torgau to make a junction with the Reichsarmee. On its return, the regiment was attached to General Brentano's Corps. On November 3, it took part in the bloody Battle of Torgau where it covered the retreat of the Grenzer light troops, suffering heavy casualties from the Prussian artillery. As part of Brentano's Corps, the regiment then drove Kleist's troops out of Klingenberg where it took its winter-quarters.

On January 5 1762, the regiment was sent to Altenburg. It was later attached Maquire's Corps posted at Dippoldiswalde. At the end of June, the entire Saxon cavalry corps was sent to the border between Saxony and Bohemia. In October, General Buttler sent some volunteers of the regiment under Lieutenant von Rex drive Prussian light troops out of the Mulde Valley. In November, the regiment encamped near Fischbach while Lieutenant-General von Gößnitz's headquarters were established at Putzkau. The Saxon cavalry was in very poor conditions due to constant campaigning and bad financial situation (troopers were unpaid for months). Uniforms were in rags and troopers exhausted.

The uniform depicted in this section is inspired by an illustration from a 1756 manuscript of the Deutsches Historisches Museum in Berlin. 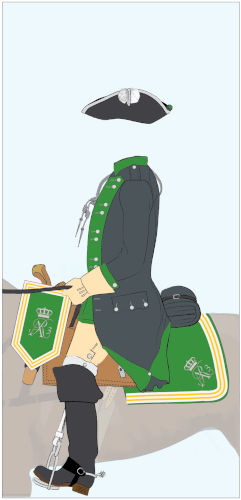 Troopers were armed with a sword, a pair of pistols and a musket.

Leibstandarte: white damask field, centre device consisting of a gold shield of ornate design carrying the Royal Polish arms (white eagles and white knights on a red field) and on the centre the arms of Saxony beneath the electoral hat, surmounted by a crimson royal crown and surrounded by green palm leaves. Crowned monogram "AR3" in gold on each corner. Fringe in silver (buttons color) and green (distinctive color).

Ordinarstandarte: ponceau red damask field. In the centre the monogram "AR3" in gold, surmounted by a crimson royal crown and surrounded by green palm leaves. One of the 4 arms of Saxony and Poland in small gold crowned shield on each corner. Fringe in silver (buttons color) and green (distinctive color).