This contingent fought on the Rhine and the Saar Rivers and in 1663 against the Turks in Hungary and at Vienna. Three companies also fought at Koblenz in 1692. The Kreis-kompagnien were in action in 1683 against the Turks (the relief of Vienna on September 12). From 1685 to 1688, they again fought against the Turks; on October 22 1686 they were at the capture of Fuenfkirchen; on October 30 at Siklos, on November 12 at Kaposvar and on August 12 1687 at Harsan.

On June 10 1697, six companies of the Regiment Schrautenbach were used to raise the Regiment Prinz Carl who served in the Upper Rhine Kreis.

During the War of the Spanish Succession, in September 1702, the regiment distinguished itself at the capture of Landau.

In 1738, the regiment became the Regiment Prinz Georg.

In 1747, a Grenadier-Leib-Kompagnie was raised.

During the War of the Austrian Succession, from 1747 to 1749, the regiment was in the Dutch service.

In 1757, the regiment, which consisted of a single battalion with 1 grenadier company (a book strength of 674 men), joined the Reichsarmee with three 3-pdr battalion guns. This army made a junction with a French army under the command of the Prince de Soubise for the planned invasion of Saxony. By August 5, it had 612 men fit for service. On November 5, the regiment fought against Prussia at the Battle of Rossbach where they were very distinguished.

On February 27 1759, the regiment was part of the Austro-Imperial army who capitulated at Erfurt. In May, the grenadiers of the regiment were part of Macquire's force who fought to contain a Prussian incursion in Franconia. On May 7, this force was attacked by Prince Henri near Oelsnitz and forced to retire by Asch (present-day Aš). The grenadiers suffered heavy losses in the combat. On September 8, the regiment took part in the Combat of Zinna near Torgau where it was deployed in the first line of the infantry centre. It covered the retreat of the demoralised Austro-Imperial army into the nearby forest. On November 20, one battalion of the regiment took part in the Battle of Maxen where it was attached to the Reichsarmee Contingent deployed near Gieshübel under the command of the Prince von Stolberg.

The first uniform of the regiment was a dark blue, single-breasted coat with white collar and Swedish cuffs, white buttons and lace. The neck stock was red, the hat was edged white, with a white hat cords. Dark blue breeches and stockings, buff bandolier and brown cartridge pouch, buff waist belt for the sabre. NCOs carried halberds.

The grenadier company wore brass-fronted caps with the Hessian lion badge, cut out on a white backing, the back was dark blue.

Officers had no uniform at this time, but all wore the silver gorget and wide waist sash in red, silver and blue silk, under the coat. They carried swords and spontoons. In 1717 officers paraded for the first time in uniform. The colours were as for that of the men, but cloth and decorations were of much finer quality. Their hats were edged with a broad silver border and short, red feathers. They had silver lace buttonholes to the chest, on the cuffs and pocket flaps and in the small of the back. Their neck stocks were white, breeches were blue and the stockings were red. Sash, gorget, sword and spontoon as before. Officers of the grenadier company wore grenadier caps and their sashes were borne over the right shoulder. Instead of spontoons, they carried a carbine. On the gold-embroidered waistbelt, they had a small black pouch with gilt grenades on the lid.

In 1731 the regiment was equipped with flintlock muskets with iron ramrods.

The grenadier wore a dark blue uniform, faced white, white buttons and lace. The coat was lined white and had a white aiguilette on the right shoulder. Belts, small clothes and gaiters were white. His cap had a white metal front plate, with brass lion, crown, grenades and trophies. The pompom, headband and tapes were white, the backing was dark blue.

In 1757, the uniform style became Prussian; this version was worn until 1770. This is the uniform depicted in the following sub-sections. 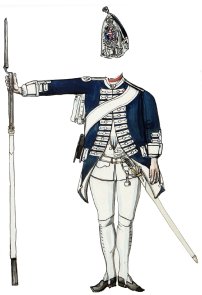 Privates were armed with a musket, a bayonet and a sabre (Prussian pattern sabre with brass hilt; white straps and tassels).

Grenadier officers wore grenadier caps and the sash over the right shoulder; they were armed with carbines and had the small pouch on a gold-embroidered waist belt.

Zernin's copies from the Darmstädter Grenadierbilder 1750 illustrate quite different colours.

Knoetel`s plates are listed by Arabic numerals within the volumes, which are shown by Roman numerals: II 48 Kreis-Regiment 1752