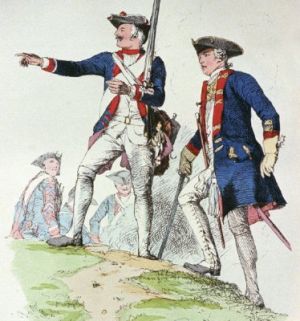 The regiment was raised in Brandenburg/Havel on March 22 1713. In July of the same year, it was transferred to Pomerania. In 1715, it took part in the campaign in Pomerania.

During the War of the Polish Succession, the regiment served on the Lower Rhine in 1733 and 1734.

From 1746, the regiment garrisoned Stargard in Pomerania. It levied its recruits from the Pomeranian districts of Belgard, Neu-Stettin and Polzin; from the Principality of Cammin; from the Parish of Colberg; and from the towns of Bärwalde, Pyritz and Stargard.

The numbering system (Stammliste) was first used by Leopold I., Fürst von Anhalt-Dessau (Der alte Dessauer) in the Dessauer Spezifikation from 1737. Around 1780 the numbers were used in the printed Stammlisten, still with some variations for the fusilier regiments. It became official by "Cabinets-Ordre" from October 1, 1806. The present infantry regiment was attributed number 22.

The regiment was disbanded in October 1806 after the capitulation of Pasewalk.

On August 26 1756, when the Prussian army was ordered to proceed to the invasion of Saxony, the regiment (including its two grenadier coys) was part of the centre column led by Frederick II. More precisely, it belonged to Prince Moritz's Corps. The centre column had concentrated in the area of Brietzen and advanced unopposed upstream along the Elbe River by Torgau and Wittenberg, leaving Meissen to its left. On September 6, it encamped at Rothschönberg and finally reached Wilsdruf. While the Prussian Main Army moved forward to engage the Austrian Army at Lobositz (October 1), the regiment remained in the Pirna Country to maintain the blockade of the Saxon Army which surrendered on October 17.

On May 6 1757, during the invasion of Bohemia, the regiment did not take part in the Battle of Prague. It was rather deployed on the left bank of the Moldau near the Weissenberg as part of Keith's Corps. On June 18, the regiment took part in the Battle of Kolin where it was deployed in the first line of the infantry right wing under Prince of Bevern. The regiment broke through the Austrian right wing but was forced back by a counter-attack of the Austrian cavalry, suffering terrific losses (26 officers and 1,165 men). On July 27, the regiment, which had suffered so much at Kolin, was detached under General Manteuffel to reinforce the Prussian corps defending Pomerania against the Swedes. By September, it had reached its destination where it took part in the capture of Demmin.

On August 22 1758, as Frederick II tried to put a stop to the Russian invasion of Brandenburg, the regiment formed part of a detachment. under the command of Kanitz, sent to Wriezen to bring back the small boats stored there to cross the Oder. On August 23, the detachment successfully brought back the boats. On August 25, the regiment took part in the Battle of Zorndorf where it was deployed in Flemming's Brigade at the extreme left of the second line of the infantry centre. In this battle, the regiment distinguished itself but suffered heavy losses once more. On October 25, the regiment was part of Wobersnow's detachment sent by Dohna to lift the siege of Colberg. The detachment marched from Stargard to Massow.

At the beginning of the campaign of 1759, the regiment was stationed in Pomerania.

On November 3 1760, the regiment took part in the Battle of Torgau where it was attached to the third column of Frederick's Corps.

On December 11 1761, the regiment was part of the corps under the Prince of Württemberg who made a desperate attempt for the relief of Colberg. This corps marched from Treptow in 2 columns, escorting a supply convoy. On December 12, it was stopped by a Russian corps at the Combat of Spie and forced to retire.

On July 21 1762, the regiment took part in the Battle of Burkersdorf. It was then present at the siege and recapture of Schweidnitz. 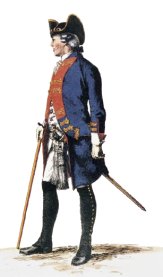 The drummer lace consisted of a plain white braid.