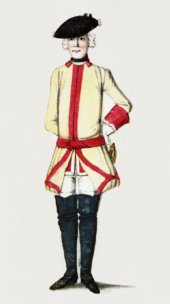 The Marche of Brandenburg was the inspectorate of the regiment and its garrison places Gransee, Kyritz, Perleberg, Wittstock andWusterhausen.

By 1806, the regiment was known as von Beeren Cuirassiers. That year on October 14, it took part in the battle of Auerstädt, in Kalckreuth's Reserve. The regiment withdrew with Blücher's corps, surrendered at Ratkau on November 7 and was not re-raised. Seventy men and horses returned to East Prussia where they went into the new 4th Kürassiers.

On August 26 1756, when the Prussian army proceeded to the invasion of Saxony, the regiment was part of the centre column led by Frederick II. More precisely, it belonged to Keith's corps. The centre column had concentrated at Brietzen and advanced unopposed upstream along the Elbe river by Torgau, Wittenberg, leaving Meissen to its left. On September 6, it encamped at Rothschönberg and finally reached Wilsdruf. On October 1, the regiment took part in the battle of Lobositz It was assigned to the cavalry brigade of major-general Pennavaire in Kyau Division During this battle, it lost 10 officers and 127 troopers. On October 23, when Keith's army left Lobositz to return to Pirna country, the regiment joined Frederick at Linai to cover Keith's advance. On October 28, the whole force reached Gross-Sedlitz near Pirna and the regiment took its winter quarters soon afterwards.

In April 1757, the regiment was part of the Prussian army who proceeded to the invasion of Bohemia. On May 6, the regiment did not take part in the battle of Prague. It was rather deployed on the left bank of the Moldau near the Weissenberg as part of Keith's corps. From May 9 to June 20, it participated in the siege of Prague. On June 18, the regiment took part in the battle of Kolin. It was kept in reserve behind the cavalry left wing under major-general von Krosigk. It then led the charge of Krosigk's brigade, which broke three enemy infantry regiments. On July 23, the regiment was at the combat of Kulm; and on July 28, at the combat of Arbesau. On September 26, it was present at the cannonade of Barschdorf. On November 22, the regiment took part to the battle of Breslau where it was deployed in Krockow's brigade, in the second line of the right wing under baron von Kyau. From December 5 to 20, it took part in the siege of Breslau, then from December 23 to 29, to the siege of Liegnitz.

On July 6 1762, the regiment took part in the combat of Gross-Kunzendorf. On July 21, it fought in the battle of Burkersdorf. From August 4 to October 10, it took part in the siege of Schweidnitz. On August 16, it fought in the battle of Reichenbach. It then campaigned in Saxony where on November 7, together with the 2nd Hussars, they broke an Austrian corps and took 400 prisoners and a gun in skirmishes at Spechtshausen and in the Tharanter Forest. 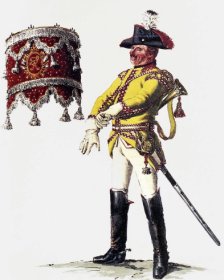 The apron of the kettle-drum was crimson with silver fringes and tassels and decorated with a golden “FR” cipher within a silver madallion surrounded by trophies of arms.

On November 7 1806, at the capitulation of Ratkau, the 5 standards were lost. The regiment was not re-raised.