Prussian Carbine FWR Thumb Plate - Source: Digby Smith
The construction of this weapon was as for the infantry musket. The barrel was held onto the stock by pins. The main difference was that a ring was fitted around the butt just below the lowest ramrod guide; an iron runner extended from this ring, back to the lock fixing bar, where it was screwed to the butt. An iron ring was held by this bar, which was meant to take the carbine hook on the man's bandolier.

The thumb plate, on top of the neck of the butt, bore the crowned royal cipher: 'FWR' (Friedrich Wilhelm Rex I).

These weapons were produced in Spandau from 1731 onwards. 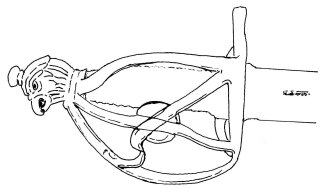 The hilt is of brass; on one side of the blade is stamped the word 'POTSDAM', on the other is the eagle. One bar of this grip seems to have been badly bent.

The hilt is of iron; the brass wire covering the black grip is missing. On one side of the blade is stamped the word 'POTSDAM'; on the other is stamped the eagle.

The hilt is of gilt brass, there are rococo designs engraved on both sides of the base of the blade, just under the hilt.

The cast brass handle is the same as for the infantry sabre M1715. The letters 'MYS I' have been stamped into the pommel. There are no marks on the blade.

Digby Smith for the initial version of this article