The unit was raised in 1691 in the area of Halberstadt from new recruits by Colonel Dubislav Gneomar von Natzmer as the Corps Gensdarmes, forming the third company of the Grands Mousquetaires. Von Natzmer became the first “Chef” of the regiment.

A second squadron was raised in 1713, then a third. In 1714, the White Squadron of the Garde du Corps was brought into the regiment. From July 17 to September 24, 4 squadrons were at the siege of Stralsund. In 1718, a fifth squadron was raised. The sergeants of the regiment had the rank of Cornets in the army.

From 1714, the staff and one squadron of the regiment were stationed in Berlin. In 1718, the regiment received a fifth squadron. From 1720, the entire regiment was quartered in Berlin in a location that would later become known as the Gendarmen-Markt.

At the outbreak of the War of the Austrian Succession (1740-48), the regiment initially served against Austria. On April 10, 1741, it took part in the Battle of Mollwitz. In March 1742, it was ambushed at night in its village quarters in Senitz, south of Westin, the regiment fought off its attackers. On June 4, 1745, it fought in the Battle of Hohenfriedberg and, on September 30, in the Battle Soor where together with Buddenbrock Cuirassiers they drove 50 Austrian squadrons from a hill and captured the main enemy battery.

Mark Brandenburg was the inspectorate of the regiment and its garrison place was Berlin.

By 1806, the regiment was still known as “Gens d'armes”. That year, on October 14, it was in Kalckreuth's Reserve at Auerstädt and suffered heavy losses. It then joined Hohenlohe's Corps and surrendered at Anklam on November 1. The regiment was not re-raised. The depot went into the new 4th Kürassiers.

On August 26, 1756, when the Prussian army launched the invasion of Saxony, the regiment was part of the centre column led by Frederick II. More precisely, it belonged to Margarve Karl's Corps. The centre column had concentrated in the area of Brietzen and advanced unopposed upstream along the Elbe River by Torgau and Wittenberg, leaving Meissen to its left. On September 6, it encamped at Rothschönberg and finally reached Wilsdruf. On October 1, the regiment took part in the battle of Lobositz where it was assigned to the cavalry brigade of Major-General Pennavaire in Kyau Division. During this battle, it took 2 standards to Cordua Cuirassiers and lost 83 men. On October 16, it was among the Prussian force who received the surrender of the Saxon army at Pirna. On October 23, when Keith's Army left Lobositz to return to the Pirna country, the regiment joined Frederick at Linai to cover Keith's advance. On October 28, the whole force reached Gross-Sedlitz near Pirna and the regiment took up its winter quarters soon afterwards.

In April 1757, the regiment was part of the Prussian army who proceeded to the invasion of Bohemia. On May 6, the regiment did not take part in the Battle of Prague. It was rather deployed on the left bank of the Moldau near the Weissenberg as part of Keith's Corps. From May 9 to June 20, it covered the unsuccessful Siege of Prague, following the Prussian army in its retreat to Leitmeritz to cover Saxony. At the end of August, the regiment was part of the small Prussian army hastily assembled at Dresden by Frederick to head towards Thuringia and to contain the Franco-Imperial invasion of Saxony. On August 30, it accompanied Frederick in the vanguard when the army left Dresden. On November 5, at the Battle of Rossbach, the regiment was deployed in the second line of the right wing under Major-General von Seydlitz. During this battle, it captured 7 standards. It then followed Frederick in the forced march towards Silesia to contain the Austrian invasion of Silesia. On December 5 at the Battle of Leuthen, the regiment was deployed in Lentulus' Brigade in the first line of the cavalry right wing under Lieutenant-General von Zieten. During this battle, it broke the Jung-Modena Dragoons and took a cannon. Together with the Garde du Corps, they led the pursuit and brought in 15 more, as well as 5 colours, 9 standards and several hundred prisoners.

In March 1758, the regiment took part in the invasion of Moravia. From May 27 to July 2, it covered the unsuccessful Siege of Olmütz. On August 10, it was part of the corps who accompanied Frederick when he marched from Silesia to join Dohna to contain the Russian invasion of Brandenburg. On Tuesday August 22, this corps made a junction with Dohna at Manschnow. On August 25, the regiment fought in the Battle of Zorndorf where it formed part of the first line of the cavalry left wing. Together with the Garde du Corps and Czettritz Dragoons, they charged over the Zubern-Grund and into the milling mass of disordered Russian infantry, casting it into irretrievable confusion and taking 7 colours and 14 cannon but losing 98 men. On September 2, a week after the battle of Zorndorf, when it became clear that the Russian army was slowly retiring towards Landsberg, Frederick assembled the corps that he had brought with him from Silesia and left for Saxony where his help was badly needed. On October 10, the regiment took part in the Battle of Hochkirch where it was deployed in the centre of the first line in Zieten's Cavalry Brigade.

On September 25, 1759, the regiment took part in the clash at Hoyerswerda.

From July 12 to 29, 1760, the regiment took part in the unsuccessful Siege of Dresden. On August 15, it was in the Battle of Liegnitz but did not take part in the engagement. On September 17, it fought in the Combat of Hochgiersdorf. On November 3, it took part in the sanguinary Battle of Torgau. 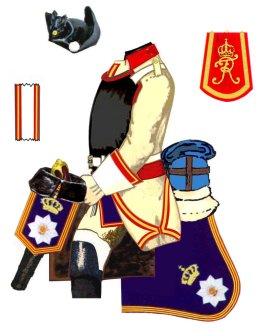 Troopers were armed with a heavy straight-bladed sword, a pair of pistols and a musket. They wore a blackened breastplate edged red and fastened by leather straps. The musket strap was white edged with the regimental lace.

The square standards were made of damask. The cords and tassels were silver and black. The pole of the standard was an amber tournament lance reinforced with iron hinges and gold finial.

The standard bearers had amber standard bandoliers, edged and fringed in gold.