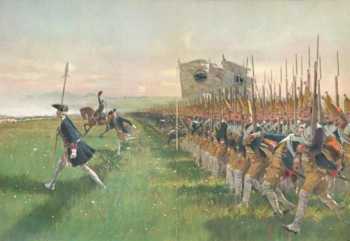 The regiment was raised in May 1675 for the Hereditary Prince Frederick. It then counted two battalions. Upon his accession to the electoral throne as Frederick I, it became the King's Regiment.

In 1677, the regiment took part in the campaign in Pomerania.

In 1686, as part of the Holy League's army, the regiment took part in the reconquest of Ofen (present-day Buda) in Hungary.

At the beginning of the War of the Spanish Succession, in 1704, the regiment took part in the siege of Geldern and in the Battle of Blenheim. Then from 1706 to 1712, it was involved in various battles and sieges: Menin, Oudenarde, Gent, Malpaquet, Tournai, Mons, Bethune, Douai, Landrecy and Meurs. In 1710, the Crown Prince Friedrich Wilhelm I raised the famous "Red Bataillon" or "Die langen Kerls" and took over command himself in 1711. The regiment was used for intensive tactical training and implementation of new concepts.

In 1713, when Friedrich Wilhelm became king of Prussia, the regiment was initially stationed in Potsdam.

In 1717, King Friedrich Wilhelm I incorporated this "Red Bataillon" into the existing King's Regiment who thus counted three battalions. Personnel came from the field regiments of the army and from the king's district.

In 1740 the regiment was reduced to one battalion of Grenadier Guards by Frederick II (the two other battalions were transferred to other infantry regiments: the II./Garde Bataillon coming entirely from its ranks), and permanently stationed in Potsdam.

During the War of the Austrian Succession, on June 4 1745, at the battle of Hohenfriedberg, the Grenadier Guard fought in the Guards Brigade and lost 184 men. Three "Pour-le-mérite" were awarded. On September 30 1745, at the Battle of Soor, the Guards Brigade pushed through the middle of the Austrian and Saxon lines. The wing grenadier company fought in the Grenadier Batallion von Treskow, who stormed the "Graner Koppe" and lost about one third of its men. 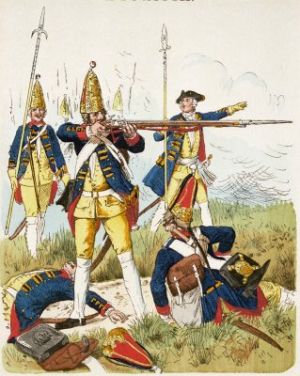 During the Seven Years War, the regimental "Chefs" were:

The numbering system (Stammliste) was first used by Leopold I., Fürst von Anhalt-Dessau (Der alte Dessauer) in the Dessauer Spezifikation from 1737. Around 1780 the numbers were used in the printed Stammlisten, still with some variations for the fusilier regiments. It became official by "Cabinets-Ordre" from October 1, 1806. The present infantry regiment was attributed number 6.

In 1806 the battalion was attached to the main army and surrendered at Erfurt and Prenzlau.

Line of tradition: in 1914 the 3rd and the 4th Company of the 1st Garde-Regiment zu Fuß. After WW1 in the Reichswehr and later in the Wehrmacht 1st Company Infantery Regiment 9. Today in the Bundeswehr, the tradition is carried by the “Wachbatallion” (Guard battalion). The motto of the battalion is "Semper Talis". Today the "Wachbataillon" is stationed in the Julius-Leber-Kaserne in Berlin-Wedding and in the Brückberg-Kaserne in Siegburg. It has about 1,800 soldiers in eight companies. 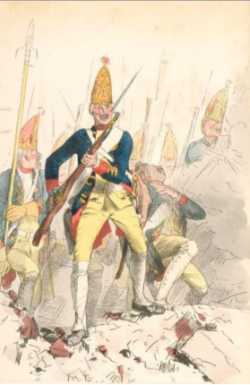 On August 26 1756, when the Prussian Army was ordered to proceed to the invasion of Saxony, the battalion was part of the centre column led by Frederick II. More precisely, it belonged to Keith's Corps. The centre column had concentrated at Brietzen and advanced unopposed upstream along the Elbe River by Torgau, Wittenberg, leaving Meissen to its left. The wing grenadiers initially remained with the regiment. It's only after the arrival of the regiment in the camp of Cotta that they were converged with those of Anhalt-Dessau Infantry. On September 6, the battalion encamped at Rothschönberg and finally reached Wilsdruf. While the Prussian Main Army moved forward to engage the Austrian Army at Lobositz (October 1), the battalion remained in the Pirna Country to maintain the blockade of the Saxon Army which surrendered on October 17.

On May 6 1757, the battalion did not take part in the Battle of Prague. It was rather deployed on the left bank of the Moldau near the Weissenberg as part of Keith's Corps. At the end of August, the regiment was part of the small Prussian army hastily assembled at Dresden by Frederick to head towards Thuringia and to offer battle to the Franco-Imperial Army invading Saxony. On November 5, the battalion fought in the Battle of Roßbach where it was deployed in the first line of the infantry left wing under Lieutenant-General Prince Henri. One month later, on December 5 at the Battle of Leuthen, the regiment was deployed in Kahlden's Guards Brigade in the first line of the infantry centre. The battalion performed a "miracle of bravery" when, at about 2:30 p.m., this battalion along with the second and third battalions of the Garde were hurled against the village of Leuthen. A dreadful and destructive contest of infantry ensued with the Austrians defending the village with extraordinary determination. The Prussian elite units stormed the churchyard and, with the help of the entire infantry left wing, finally prevailed. During this battle, the battalion lost 36 dead and 156 wounded (27%)

On October 14, 1758, in the catastrophic Battle of Hochkirch, the regiment was initially deployed in the centre of the first line, in front of Rodewitz covering the headquarters. It counter-attacked together with the Garde, Bornstedt InfantryWedell Infantry west of the village. They pushed back the enemy for a while but suffered heavy losses (335 men or 47%).

In 1760, Major-General Friedrich Christoph von Saldern took over command. He was an ideal teacher for his officers, great tactician, intelligent philanthropist, and a father to his men. On August 15, at the Battle of Liegnitz, the regiment was stationed on the left wing by the Katzbach River. On November 3, in the Battle of Torgau, as part of the Guards Brigade, it attacked as advance guard of Zieten's Corps. They attacked the enemy at nightfall on the flank, as well as from behind, and achieved the decision. They lost eight officers and 338 men (48%).

Two years later, on July 20 1762, the regiment seized the Castle of Ohmsdorf as starting point for the attack on the Austrian entrenchments between Burkersdorf and Leutmannsdorf. Some weeks later at Reichenbach they arrived after the decision was reached.

All privates wore a grenadier mitre. 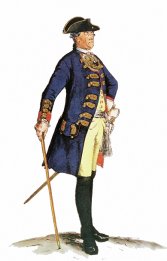 Officers had tricorne edged with a thin golden lace and a gilt button. They always wore tricornes notwithstanding if they were commanding fusiliers or grenadiers. They also wore a white neck stock and a black and silver sash around the waist. They carried an officer stick and a silver and gold gorget. Their coats had no collar otherwise, they were similar to those of the privates but had no turnback and had gilt buttons and 4 pairs of golden loops on the front of the coat; 4 golden loops at the cuffs; 2 on each pocket as well as sidewise at the waist and in the small of the back. 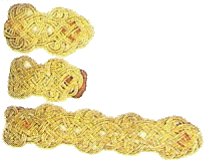 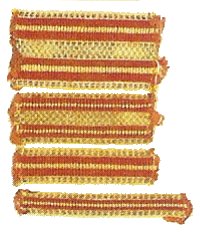 Gold-red-yellow-red-gold drummers lace. Each swallow nest with five bars; each sleeve with 8 chevrons. Lace on the pocket and on the front and back of the coat. All button loops were also made with this lace.

The colours of this prestigious regiment underwent several changes throughout its history. In 1740, upon Frederick II accession to the throne, the former colours might have had their corner devices modified, retaining the same crown, palm fronds and FWR ciphers but with a blue field. However, it is also possible that the former design was still in use during the Seven Years' War and that the two designs have cohabited within the regiment.

Colours of this pattern were captured by the Austrians during the Battle of Hochkirch on October 14, 1758. They are still on display at the Heeresgeschichtlichen Museum in Vienna.

Colonel colour (Leibfahne): White field. Centre device consisting of a white medallion surrounded by a golden palm fronds and surmounted by a gold crown. The medallion is decorated with a black eagle holding a sword and lightning bolts surmounted by a blue scroll bearing the golden motto "Pro Gloria et Patria". Corner monograms (crowns, palm fronds, FWR ciphers) in gold on a blue field and grenades in gold.

Regimental colours (Kompaniefahnen): White field. Centre device consisting of a blue medallion surrounded by a golden palm fronds and surmounted by a gold crown. The medallion is decorated with a black eagle holding a sword and lightning bolts surmounted by a white scroll bearing the golden motto "Pro Gloria et Patria". Corner monograms (crowns, palm fronds, FWR ciphers) in gold on a blue field and grenades in gold.