For a more general view of the subject please refer to our article Prussian Artillery Equipment. The present article is dedicated to the detailed presentation of the various types of howitzers used by the Prussian Army.

The tables of this article are based on Gohlke pages 92-93 and additional details from Curt Jany (see references).

N.B.: in the following sections

The popular light 7-pdr howitzer was introduced in 1758 - dimensioned rather similar to the Austrian 7-pdr or the British 5.5 inch howitzer (German 8-pdr). 45 such pieces had been cast and were added to the park.

In 1759, the greater part of the 7-pdr howitzers was distributed among the first line of infantry and the grenadier battalions of Frederick’s royal army in Silesia at a ratio of 1 piece per battalion. These battalions now had effectively 3 guns each instead to the former 2. 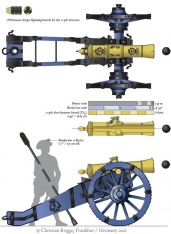 The Holtzmann M1744 Long 10/11-pdr Howitzer was designated as Stein–Kartaune.

The first barrels of these 10 or 11-pdr pieces were designed from 1740 on. It was a 6.3 inch (Berlin unit) class howitzer as per the French/English classification during this period. The Prussian constructors could not agree on what calibre should be used, and as a result, several different designs and scales were found with this range of ordnance. Initially, a diameter of 6.36" stone was employed as basic scale, which really equals Prussian scale 10 Pfund and 17 Loth (ounces) or simply 10.5 pounds. However, the piece illustrated in this section, seems to have been scaled for rounds with a diameter of 6.3" (16.48 cm) instead, rather then for the true 10 pound stone diameter rounds. It equals the iron shot diameter of a Prussian former 36-pdr cannon (Kartaune). As a result, this piece was designated as a Stein–Kartaune (lit. ‘stone cannon’). From 1753, all barrels of this model were proportioned to the basic shot diameter of 6.36" stone.

The Klemmkartätsche (simplified illustration) of the 10-pdr howitzer consisted of a solid cylindrical wooden casing with 3 cylindrical bores holding 9 iron shots of 3 pound diameter (7.19 cm). The rear end of the casing adopted a conical shape to fit tightly in the chase linking with the chamber of the barrel.

For the accompanying illustration, the dimensions suggested by Malinowsky & Bonin (Geschichte der brandenburg–preussischen Artillerie, vol. ii, pp. 84 ff.) have been used. To proportion a howitzer, Prussian designers employed the diameter of the shot as basic scale (D). It was divided into 48 parts as opposed to the 24 p with the cannon design. For this piece, the design was remarkably complex. In fact, two different scales were used to determine the dimensions:

The actual shell fired had a weight of approx. 26 pounds. Nowadays, the piece would be more acurately described as a ‘gun-howitzer’. In fact, its design is closer to Russian Unicorn gun–howitzer (10 D barrel design) of the same period. The extraordinary length of the barrel (8 D11) was based on the initial use intended for this howitzer which was not designed to fire shell but rather cannister as well as a specialized grape round, the so called Klemmkartätsche of Holtzmann's. However, during the Seven Years' War, ammunition supply tables also indicate that ordinary howitzer shells were fired.

The bracket cheeks of the carriages of some of the 10/11-pdr howitzers manufactured between 1743 to 1746 are said to have been designed with a straight lower face instead of the otherwise common design with an angle (see M&B, vol ii, p. 1841). It is probable that the carriage rather looked as the one illustrated, especially for 8 D pieces. Its dimensions resembled more those of the light 24-pdr cannon but without the raised lower face of the centre section. This design did not allow to lay the piece at an elevation greater than 15°. Other 10/11-pdr howitzer models, primarily designed to fire shell would require a design closer to the M1717 Linger 18-pdr. Overall, the structure of this howitzer carriage needed to be somewhat more massive then the light 24-pdr cannon, for it had to sustain the more powerful recoil of this piece heavier shot. Height of the wheels is believed to have been 49" – the same height as for the 16 D Holtzmann or Linger 12-pdr cannons of this period.

The wedge of the M1717 cannon was adapted to the carriage of this howitzer. The barrel had an elevation of 5°. 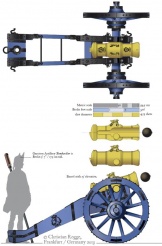 This howitzer was a 7.6 inch (Berlin unit) class howitzer as per the French/English classification during this period.

Serial casts are documented till about 1744. By 1756, these piece had been removed to fortresses and arsenals. Exceptionally, in May 1758, two 18-pdr field-howitzers taken from the fortress of Königsberg were used by Dohna's Pomeranian Corps.

The accompanying illustration is based on an illustration from a Prussian artillery manual dated approx. 1745 as weel as on records found in Malinowsky & Bonin (M&B), Geschichte der brandenburg–preussischen Artillerie, vol. II, Berlin 1841.

The design of the barrel is described in detail in M&B as well as some details concerning the carriage design. This information allows for a more acurate dating and confirmation of the authenticity of the dimensions illustrated in the original drafts which had no reference to scale.

In the accompanying illustration, wheel are depicted with a height of 51 Berlin inches to make the best fit with the dimension of the bracket cheeks. As per M&B, the carriage had iron Schwalbenschwänze (Engl. lit.: dovetails) affixed on the fellows instead of the more customary straps. These dovetails are documented for howitzer carriages dating approx. of 1717. With such a design, maximum elevation of the barrel would arrive at approx. 40° to 45°, which is quite a lot for a howitzer. That such an elevation was intended may be confirmed by this pieces unusual dimensions and shape of its centre transoms, which were designed as a single largish block. No record could be found on how the piece was laid on such a carriage.

M&B also mention that the M1717 wedge had been adapted to this piece which seems quite impossible with such a design. Obviously, to accommodate this wedge, this piece must also have been fielded in another configuration with the more conventional placement of two centre transoms. Apparently, M&B fail to catch this detail.