The regiment was raised by Bogislaw von Schwerin in Pomerania and Neumark according to a warrant issued by the Elector of Brandenburg Friedrich Wilhelm on December 20, 1655. In 1656, it took part in the Battle of Warsaw. In 1657, it was transferred permanently to East Prussia and took up quarters in Rastgenburg and Gerdauen. In 1659, it took part in the affair of Braunsberg.

In 1672, the regiment formed part of a relief corps sent to Poland.

In 1674, during the Franco-Dutch War (1672-78), the regiment campaigned on the Lower-Rhine. In 1675, it was present at the Battle of Turckheim. The same year during the Swedish-Brandenburg War (1675-79), the regiment took part in the storming of Rathenow. In 1676, it campaigned in Pomerania and took part in the siege and capture of Anklam. In 1677, it participated in the siege of Stettin. In 1678, it returned to Prussia.

In 1683, during the Great Turkish War, four companies of the regiment formed part of the relief corps sent to Hungary. In 1686, one battalion was sent to Hungary and took part in the siege of Ofen.

In 1691, the second battalion was sent to Hungary where it took part in the victorious Battle of Slankamen and in the siege of Gross-Wardein. In 1692, this battalion returned to Prussia.

In 1694, the first battalion campaigned in Brabant where it took part in the siege and capture of Huy. Meanwhile, the second battalion was encircled by the Turks in the camp of Peterwardein during three weeks.

In 1695, the first battalion campaigned in Brabant where it took part in the siege and capture of Namur. Meanwhile, the second battalion continued to operate in Hungary.

In 1696, the first battalion campaigned in Brabant. Meanwhile, the second battalion continued to operate in Hungary.

In 1697, the first battalion campaigned in Flanders. Meanwhile, the second battalion continued to operate in Hungary where it fought in the Battle of Zenta.

In 1700, the first battalion returned to Prussia.

During the Seven Years War, the regiment was commanded by:

The numbering system (Stammliste) was first used by Leopold I., Fürst von Anhalt-Dessau (Der alte Dessauer) in the Dessauer Spezifikation from 1737. Around 1780 the numbers were used in the printed Stammlisten, still with some variations for the fusilier regiments. It became official by "Cabinets-Ordre" from October 1, 1806. The present infantry regiment was attributed number 2.

In 1757, the regiment was part of Lehwaldt's Army assigned to the defence of East Prussia against a Russian invasion. On August 30, at the Battle of Gross-Jägersdorf, it was deployed in the first line of the infantry right wing in Lieutenant-General Kanitz's Brigade. The regiment suffered heavy casualties during this battle, loosing 16 officers and 489 men.

On August 25 1758, the regiment took part in the Battle of Zorndorf where it formed part of the vanguard led by Lieutenant-General von Manteuffel. Its recruiting ground being occupied by Russian troops, the regiment could not easily replenish its ranks. On October 25, the regiment was part of Wobersnow's detachment sent by Dohna to lift the Siege of Colberg. The detachment marched from Stargard to Massow.

On July 23 1759, the regiment took part in the Battle of Paltzig where it was attached to Stutterheim's Division deployed on the left in the first line of infantry. During this battle, the regiment suffered heavily, loosing 13 officers and 642 men. A few weeks later, on August 12, the regiment fought in the Battle of Kunersdorf where it was deployed in the first line of the left centre as part of Diericke's Brigade. After this battle, the regiment was reduced to a single battalion. On December 3, this battalion was attached to a small isolated Prussian force under Major-General Dierecke who had taken post at Meissen. This small corps was attacked by a much stronger Austrian force during the Combat of Meissen. On December 4, the battalion, being among the 3 battalions still on the right bank of the Elbe, was overwhelmed and captured.

In 1760, the regiment was re-raised from press-ganged troops of the Duchy of Mecklenburg. For the last campaigns of the war, it operated in Pomerania. 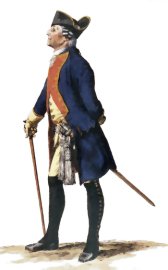 Officers had tricorne edged with a thin gold lace. They always wore tricornes notwithstanding if they were commanding fusiliers or grenadiers. They also wore a white neck stock and a black and silver sash around the waist. They carried an officer stick and a silver and gold gorget. Their coats were similar to those of the privates but had no turnbacks and had gilt buttons.

Officers' lace was gold foliate edging around the lapels, cuffs, and sleeve flaps.

Musicians' lace was red with black and white patterns. Swallow nest with five vertical bars and one horizontal bar. Nine chevrons on each sleeve. Lace along the lapels, on the pockets, on the cuffs and on the front and back of the coat.

The pikes used as staffs for the colours were brown (some sources mention white) with brass finials.