This Land Regiment was raised in 1729. It was also known as the Berliner Garnison-Regiment. It counted 7 musketeer companies (no grenadier) and garrisoned Berlin.

Till 1746, the regiment assembled each year for training. Then, it did not assemble till 1756.

In mid-August 1756, the regiment was assembled in Berlin. It consisted of 7 musketeer companies (no grenadier), each of 215 privates.

From 1738 to 1756, all four Land Regimenter probably wore similar uniforms.

Privates were armed with a short musket.

New uniforms were issued in the Summer of 1756.

Privates were armed with a short musket and a bayonet.

A plate kept at the Deutsches Historisches Museum depicts the 1757 uniform with yellow buttons, a red shoulder strap, a white waistcoat. The same plate also illustrates a totally different uniform:

A plate by Luderitz depicts a uniform dated 1758 which is quite similar to our plate with the following differences: 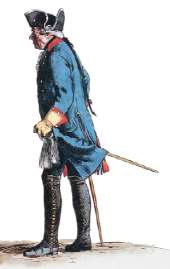