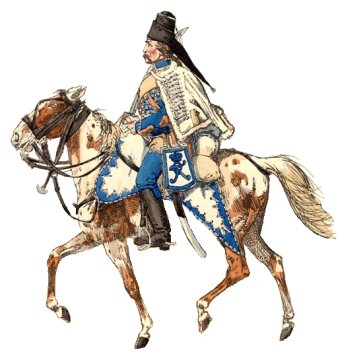 The first 5 squadrons of the regiment were raised in 1740 and 1741 in Prussia by colonel Georg Christoph von Natzmer (died in 1751 as major-general) as a regiment of Uhlans from Polish and Lithuanian recruits.

In 1742, the unit was converted to a hussar regiment and increased to 10 squadrons.

The regiment was often referred to as the “White Hussars” because of their white pelisses or die Bählämmer (the bleating lambs), later die Wölfe im Schafspelz (the wolves in sheep's clothing) or simply die Wölfe (the wolves).

During the War of the Austrian Succession, the regiment was with the Prussian army for the campaigns of 1741 and 1742 without taking part to any action of note. On February 14 1745, it fought in the combat of Planitz. On March 1, it was at the combat of Hirschberg. On June 4, it took part in the battle of Hohenfriedberg, capturing the kettledrums of the Saxon Karabinier-Garde. On September 30, it was at the battle of Soor. During the skirmish of Gross-Strehlitz, it charged an enemy column and took 112 prisoners. On December 15, the regiment fought in the battle of Kesselsdorf.

The numbering system (Stammliste) was first used by Leopold I., Fürst von Anhalt-Dessau (Der alte Dessauer) in the Dessauer Spezifikation from 1737. Around 1780 the numbers were used in the printed Stammlisten. It became official by "Cabinets-Ordre" from October 1, 1806. The present hussar regiment was attributed number 4.

On August 26 1756, when the Prussian army proceeded to the invasion of Saxony, the regiment was part of the left column led by the prince of Bevern. This column had concentrated in the area of Lübben, then advanced through Lusatia by Hoyerswerda and Bautzen, to Hohenstein (Sept. 8) then to Lohmen north of the Elbe near Pirna. From September 10 to October 16, the regiment took part in the blockade of Pirna.

On July 29 1758, during the Prussian retreat after the failed invasion of Moravia, the regiment was sent forward against the Austrians to cover the crossing of the Mettau by the main army. On August 10, margrave Carl, commanding in Silesia, detached the regiment along with 1 battalion of Frei-Infanterie to observe Daun's manoeuvres towards Saxony. The regiment was then moved to Greifenberg (actual Gryfow Slaski). On September 10, the regiment along with 3 Freikorps battalions reconnoitred Loudon's position at Radeberg. It fought in a skirmish with Loudon's rearguard near Hartha, losing about 500 in the engagement. On October 14, the remainder of the regiment took part in the battle of Hochkirch where 5 of its squadrons were deployed in the centre of the second line in Zieten's cavalry brigade. The 5 other squadrons were attached to Retzow's corps near Weissenberg. On October 28, the regiment took part to the victorious engagement of Görlitz against the Austrian cavalry, taking 450 prisoners.

From February 24 to March 4 1759, about 250 men of the regiment were part of the small Prussian corps under the command of major-general von Wobersnow who made an incursion in Poland against the Russian magazines. During this incursion, Wobersnow's forces destroyed food supply which would have supplied 50,000 men for 3 months. On July 23, the regiment took part in the battle of Paltzig where it was deployed in the second line of the cavalry right wing. A few weeks later, on August 12, the regiment fought in the bloody battle of Kunersdorf where it was deployed in the second line of the right wing as part of Platen division. During the cavalry battle, Puttkamer tried to rally the wary cavalrymen by charging at the head of his hussars but was shot dead.

On November 3 1760, during the battle of Torgau, the regiment was assigned to the guard of the army train.

In 1761, the regiment served in Saxony. At Plauen, its 2nd battalion pursued the Austrian rearguard, taking many prisoners and 3 guns.

On August 16 1762, 3 squadrons of the regiment took part in the battle of Reichenbach. 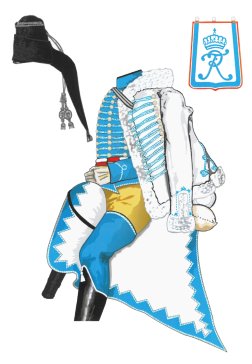 Troopers were armed with a short, curved sabre, two pistols and a carbine. They rode dappled horses.