N.B.: the principal source about the Alabarderos (halbardiers) was lost during the Spanish Civil War.

The Guard of Alabarderos was a palace guard unit, the halberd being the attribute of the Royal Guard, raised on May 6 1707 from veterans coming from three ancient company sized units of Philip IV:

The throne of San Fernando was now under the French sphere of influence. Besides political matter, France was, at that time, leader in military organization.

Philip V was an Anjou and, when he reached the Palace of Buen Retiro, was 17 years old and could not speak Spanish. Louis XIV of France boasted “…..Pyrenees Mountains are no more…”

Some variation may be found:

The Spanish Household units were modelled along French lines. The Alabarderos assumed a similar role as the French Garde du dedans (Inner Guard) of the Louvre Palace. Indeed, the Alabarderos were in charge of the internal security service of the Palace. They depended from the Mayordomo Mayor de Palacio but received orders directly from the king. They in particular controlled the doors of the Royal Apartments and the stairs. Their barracks were located on the Tesoro del Rey road.

In term of precedence, the unit ranked immediately after the Reales Guardias de Corps.

During the reign of Philip V, the unit was under the command of three successive captains:

As for the captains of the companies of the Reales Guardias de Corps, the captain of Alabarderos also ranked as general of the Spanish army and Grandes de España. Officers as well as soldiers had to demonstrate their nobility and purety of blood.

The unit did not take part in any campaign, remaining in Madrid as palace guard. 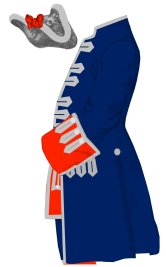 Armaments consisted of a halberd and a sword.

Dr. Marco Pagan for the initial version of this article.