Before the establishment of new Household units, in time of danger, the marquis de Louville ordered that 1,200 men of the regiment Tercio de Morados Viejos, renowned for their loyalty to the king, should be employed as security guard at the Palace.

Moreover, Philip V, the new king, traveled to Italy and reached Naples, where a new unit of ten companies of Horse Guards, a total of 500 men has been gathered at the orders of the prince of San Severo Sangro. During the journey the security of the king was assured by an escort of 100 musketeers (Flemish noblemen) created expressly for this reason. They remained in Philip's service, at the Palace, creating some problems of precedence with las Guardias de la lancilla, till June 21 1704 when, the Reales Guardias de Corps was created separating the Spanish companies, the Walloon company and the Italian one. In 1702 from Milan, Philip V had already decreed the disbandment of a German company of the old Guard.

Thus, at its creation the new, “Non plus Ultra” unit, named Real Cuerpo de Guardias de Corps, had four companies of bodyguards, each 200 men strong, for a total force of nearly 800 Guard-horsemen; the first two companies, the so-called “Spanish companies”, were integrated by Spaniards coming from the “Real de Espana” cavalry regiment; the third company, the so-called “Flemish company”, should be composed of Flemish. Therefore, the members of the “Musketeers of the King Guards” together with 100 others Flemish nobles were assigned to it. The fourth company, the so-called “Italian company”, should be recruited in Italy among “loyal volunteers” coming from the most noble families.

Giuseppe XXIII Cantelmo 16th comte of, and 9th duc de Popoli, was charged of this last but not least company. He assembled the requested Italian gentlemen and, at the end of March, embarked from Naples with his own horsemen and landed on May 3 1704 at Barcelona.

The Real Cuerpo de Guardias de Corps was the noblest unit of the Spanish army. Guards had to be of noble birth, aged between 18 and 30 years old with previous experience in a cavalry regiment. It was organised along French lines and consisted of:

Each company was divided into four brigades composed of a lieutenant or ensign, an exempto, a brigadier, a vice-brigadier, a guardia de la manga, 49 guards and a trumpeter.

This organization remained unchanged during the reigns of Philip V (1700-1746) and Ferdinand VI (1746-1759), as no changes took place in its composition, or in the number of its members nor in its uniforms.

Gentlemen of the Reales Guardias de Corps had precedence over officers of similar ranks in the regular army. The corresponding ranks are depicted in the following table.

During the reign of Charles III, with a Royal Order dated 1768, one of the Spanish companies was disbanded and the Corps remained with three companies consisting of:

This organization lasted until 1793. 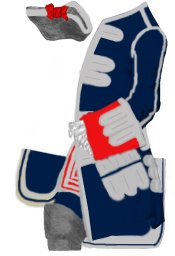 Musicians wore a dark blue coat made of velvet and heavily laced in silver and lined in crimson, deerskin cuffs laced silver, and a deerskin waistcoat.

The housings and saddle cloth were of dark blue velvet laced silver.

The apron of the trumpets and kettle-drums were dark blue, bordered, fringed and embroidered in silver and carrying the Royal Arms surmounted by a golden crown and flanked by a golden lion on each side.

Each company had its own specific standard. According to Taccoli, in 1759, all standards were bordered and fringed in silver, heavily embroidered in gold and silver.

The colour of the field of the standards and of their flagpoles were different for each company:

The obverse of all standards carried the same central device: a golden royal sun of the same pattern as the one carried on the French cavalry standards.

The reverse of all standards was heavily embroidered in gold and silver and carried 4 golden fleurs de lys, 2 golden towers and 2 golden lions around a central frame depicting a golden sun shining over the sea, surmounted by a white scroll carrying the motto of the unit: “Solvit Formidine Terras”.

N.B.: the standards were changed in 1760 but no precise information is available on these new standards which were probably quite similar to the previous ones.

Juan José Torres and the Asociación Cultural de Modelismo Histórico Alabarda as well as Dr. Marco Pagan for the information and councelling provided for this article.