Up to the reign of Louis XIV, to the exception of the Gardes Suisses, no Swiss regiment had been maintained on a permanent basis in the French Army. They usually served for four years before being sent back home and replaced by new units. In 1671, Louis XIV charged Pierre Stuppa, a captain in his Gardes Suisses, to negotiate with the Swiss Cantons the creation and cession of four regiments. Contracts were signed on August 14 of the same year. The four regiment arrived in France at the beginning of 1672 and were admitted in the French service on February 17. The present regiment had been raised in the cantons of Bern, Schwyz, Luzern, and Graubünden/Grisons.

In 1715, the regiment returned to Provence where it was reduced to two battalions.

In 1719, the regiment joined the Army of Spain and took part in the capture of Fuenterrabía, Castelléon and San Sebastian and in the siege of Roses.

In 1725, the regiment was at Strasbourg when the future Queen Marie Leszczyńska arrived there.

From 1733 to 1735, during the War of the Polish Succession, the regiment campaigned on the left bank of the Rhine.

In 1742, during the War of the Austrian Succession (1740-48), the regiment was initially stationed at Saint-Omer. In 1743, it was sent to Palatinate where, along with the Gardes Suisses, it guarded the bridge at Rhein-Emkheim near Worms. It was then sent to Landau which was threatened by the Allies. In November, two of its grenadier companies and two piquets took part in a raid on the Austrian magazines at Ettingen. In 1744, the regiment continued to garrison Landau and then took part in the siege of Freiburg. In 1745, it was transferred to Flanders where it participated in the siege of Oudenarde. In 1746, it took part in the sieges of Bruxelles and Mons. It was also present at the Battle of Rocoux but was not engaged. In 1747, it contributed to the capture of Sluys and Saas van Ghent, fought in the Battle of Lauffeld and took part in the siege of Berg-op-Zoom. It then force marched to Calais which was threatened by a British fleet. In 1748, it campaigned in Normandie with its main quarters at Caen.

In 1754, the regiment was at the training camp in Alsace.

In March 1757, the regiment marched by Liège and Stokkem to join the Army of the Lower Rhine for the planned invasion of Hanover. On April 11, one of its battalion joined the troops occupying Wesel. From April 27 to June 17, the regiment was part of the Reserve under the Prince de Soubise. On July 26 at the Battle of Hastenbeck, the regiment was brigaded with Salis Infanterie. This brigade was part of the reserve of the right wing, it covered the edge of the woods to support the attack of the Champagne Brigade on a strong redoubt at the outskirts of a forest. In this battle, Captain Biltner and one lieutenant were wounded. The regiment then followed the Maréchal de Richelieu in his invasion of Hanover, contributing to the capture of Minden and Hanover. After the Convention of Kloster-Zeven on September 8, the regiment followed Richelieu's main body who encamped at Halberstadt in Prussian territory from September 28 to November 5. The regiment was placed in the centre of the second line. However, on October 7, the regiment was detached from Richelieu’s Army and sent to reinforce the Franco-Imperial army operating in Thuringia. On November 5, the regiment was at the disastrous Battle of Rossbach where it was brigaded with Planta Infanterie in the first line of the centre. In this battle, the regiment lost Lieutenant Muller, killed; and among the numerous wounded, Captains Reynold, Montaudon, Schatzel, Wiltz and 6 lieutenants. At the end of the year, it took its winter-quarters in the third line of the French army at Minden.

In April 1758, when the Comte de Clermont redeployed his army along the Rhine, the regiment was assigned to the garrison of Wesel where it remained even during the Allied campaign on the west bank of the Lower Rhine in June. On August 5, the regiment formed part of Chevert's Corps and took part in the Combat of Mehr where its brigade formed the left flank. It did not behave very well and was broken. By August 20, the regiment was operating as part of an independent detachment with Jenner Infanterie and Lochmann Infanterie under La Chenelars. It then returned to Huningue in France to receive recruits. 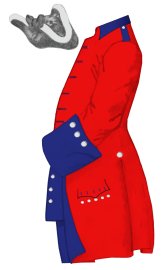