In 1634, the Maréchal de Gassion recruited guard among a Swedish regiment that he had brought back to France. The regiment was raised on February 1, 1647 from the guards of the Maréchal de Gassion who were garrisoning Courtrai. The same year, it took part in several small engagements in the surroundings of Courtrai. Still the same year, after the death of the Machéchal de Gassion during the siege of Lens, the regiment was given to the Comte de Palluau who, on October 20, incorporated his own regiment into it. In 1648, the regiment took part in the defence of Courtrai and in the siege of Ypres where it assumed garrison duty after its capture.

In 1654, the regiment took part in the attack of the Lines of Arras; and in 1655, in the siege where it then assumed garrison duties until 1657. In 1657, it participated in the siege of Cambrai, in the defence of Ardres and in the sieges of Dunkerque and Gravelines where it remained as garrison.

In 1662, when Dunkerque was restored to France by the English, the regiment contributed three companies for its occupation.

In 1666, the regiment took part in the training camp at Monchy near Compiègne.

In 1668, during the War of Devolution (1667–68), the regiment took part in the campaign of Flanders and remained in garrison at Oudenarde.

In 1672, at the outbreak of the Franco-Dutch War (1672–78), the regiment campaigned in Holland and took part in the expedition against Bodegrave and Swammerdam. During the following years, it assumed garrison duties in Holland and on the Lower-Meuse. In 1676, it campaigned in Germany. In 1677, it took part in the sieges of Valenciennes, Cambrai and Saint-Omer, in the combat of Cassel; in 1678, in the sieges of Ypres and Mons; and in 1679, in the combat of Minden and in the capture of Bergen.

In 1684, the regiment took part in the siege of Luxembourg. After the capture of the place, it returned to Saarbrücken.

In 1688, at the beginning of the Nine Years' War (1688–97), the regiment took part in the capture of Philisbourg, Mannheim and Franckenthal; in 1689, in the storming of Kockheim; in 1690, in the Battle of Fleurus; and in 1693, in the bombardment of Bruxelles. It then remained in this region until the end of the war.

In 1698, the regiment took part in the training camp of Coudun near Compiègne.

In 1701, at the beginning of the War of the Spanish Succession (1701-13), the regiment was increased to two battalions and sent to join the Army of Observation in Flanders and to occupy Namur. In 1702, the regiment then known as “Saint-Sulpice Infanterie” took part in the unsuccessful defence of Kaiserwerth; in 1703, in the defence of Namur; in 1704, in the occupation of Menin; and in 1706, in the defence of Menin. In 1707 and 1708, the regiment assumed garrison duties in the Low Countries. In 1709, the regiment, now known as “Lannoy Infanterie”, contributed to the capture of Warneton and fought in the sanguinary Battle of Malplaquet. In 1712, now known as “Louvignies Infanterie”, it took part in an engagement near Valenciennes and in the capture of Douai, Le Quesnoy and Bouchain. In 1713, it participated in the sieges of Landau and Freiburg. After the Peace of Rastatt, it was reduced to a single battalion.

During the War of the Polish Succession (1733-35), the regiment served in Italy. In 1733, it took part in the siege of Gera d'Adda and in the siege and capture of Pizzighetone and of the Castle of Milan; in 1734, in the capture of Serravalle, Novarra and Tortona, in the battles of Colorno, San Pietro and Guastalla; and in 1735, in the capture of Gonzague, Reggiolo and Revere, and in the occupation of San Bonifacio. In 1736, it returned to France where it was stationed in Metz.

On March 10, 1749, Agenois Infanterie was disbanded and incorporated into Rohan-Montbazon Infanterie.

In 1754, the regiment took part in the training camp at Aimeries-sur-Sambre.

During the Seven Years' War, the regiment ranked 32nd and was under the command of:

When the French Army was reorganised on December 10, 1762, the regiment took the name of the Province of Berry. The name was previously worn by a regiment disbanded during this reorganisation.

In 1756, the regiment was at the camp of Granville on the Channel.

Somewhere between August 23 and September 6, 1757, the regiment joined the Army of Saxony, led by the Prince de Soubise, in the area of Erfurt and Eisenach for the planned reconquest of Saxony. On September 27, it was brigaded with the Swiss regiments Diesbach Infanterie and Planta Infanterie under the Marquis de Custine in the second line of the left wing of the Franco-Imperial Army. On November 5, the regiment took part in the disastrous Battle of Rossbach where it was brigaded with Beauvoisis Infanterie in the Reserve under the Duc de Broglie. During this battle, it heavily suffered, losing Captains Bardon, Daugy and Dumaron, and Lieutenants La Line, Gay, Mainville, Lacour, Dusaulcoy, La Sauzaye, Savary and Métuer, while 18 other officers (Captains Coquerel, Allou, Boulot, de Fitte, du Varnay, Beauville, Lacourbe, Valmesnil, Prisson, de Grox, Châtillon, La Moustière, Beaumont, La Vieillêre and 4 lieutenants) were wounded. At the end of the year, it took up its winter-quarters in Marburg in Hessen.

At the end of January 1758, the regiment was assigned to the army that Louis XV planned to send to Bohemia for joint operations with the Austrian Army. However, when the Allies launched their surprise winter offensive in western Germany, the regiment retreated towards Düsseldorf and Deutz with the bulk of Broglie's Army. It passed the Rhine on April 3 and 4. By July, it had joined Soubise's Army assembling near Friedberg in Hesse. In the first days of June, as Soubise's army prepared for an offensive in Hesse, the regiment was part of a detachment under the command of the Duc de Broglie who followed up Ysenburg during his retreat. On July 23, the regiment took part in the Combat of Sandershausen where it was placed in the first line of the left wing. It took the brunt of the Hessian assault, exhausted all its ammunition and then fought with the bayonet. During this combat, it suffered very heavy casualties, loosing 66 officers and 778 men killed (including Lieutenant-Colonel de Saint-Martin) and wounded. On October 10, it was present at the Battle of Lutterberg where it was placed at the extreme left of the first line. It was not involved into any serious fighting during this battle. On October 11, it marched rapidly upon the defiles of Münden, pursuing the Allied Army and capturing a large number of prisoners. In December, the regiment took up its winter-quarters at Hanau.

On Tuesday January 2, 1759, at about 5:00 a.m., Nassau Prince Louis Infanterie presented itself before the Sachsenhausen Gate of Frankfurt and was admitted as previously agreed. As soon as it had entered the town, the regiment ordered the town-guard to deposit arms and to admit 5 other regiments (Beauvoisis (2 bns), Rohan Montbazon (2 bns), Rohan Rochefort (2 bns), Bentheim (2 bns) and Royal Deux-Ponts (4 bns)). These regiments then seized the artillery on the walls and all the other gates, easily capturing the City of Frankfurt. This very important city remained under French control for the last four years of the war. On April 13, the regiment took part in the Battle of Bergen where it formed part of the third line of the right wing under the command of Prince Camille de Lorraine. The regiment was deployed in column behind the village of Bergen. Broglie ordered it to counter-attack the Allies who were making progress against Bergen. Along with Piémont Infanterie and Royal Roussillon Infanterie, it charged at the point of the bayonet into the main street of the village, supported by Beauvoisis Infanterie. These four regiments carried the last charge and drove back the Allied attack. Broglie then personally led the regiment during the final attack which forced the Allies to retire.

The regiment spent the last years of the war on the coasts of the Channel.

In May 1762, the regiment contributed one grenadier company and one picquet company (a total of 95 men) to the unsuccessful expedition against Newfoundland and the detachment had to surrender as prisoners of war in September.

In 1763, the regiment was successively stationed in Saint-Omer, Arras and Dunkerque. 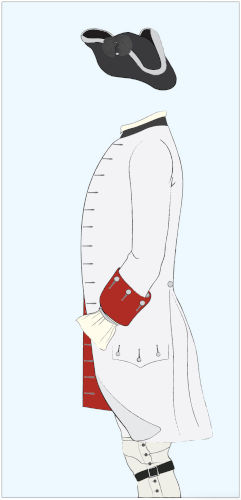 Drummers wore the livery of the House of Rohan Guéménée that Beneton describes as: "red with a large white and green brandebourg..."