The regiment was raised according to a decree of November 20 1667, from an infantry company belonging to the Comte de Montpeyroux, in garrison at Arras.

In 1668, the regiment was reduced to only four companies. In 1669, these companies embarked to relieve the Venetians in Crete where it took part in the defence of Candia (present-day Heraklion) before returning to France in October.

In 1671, the regiment ceased to be a gentleman regiment and took the name of the Province of Rouergue.

In 1672, at the outbreak of the Franco-Dutch War (1672–78), the regiment was increased to 16 companies. In 1673, it campaigned in Germany. In 1674, it was transferred to Flanders under the command of the Prince de Condé and fought in the Battle of Seneffe. It was then sent back to Germany where, under Turenne, it took part in the battles of Sintzheim, Ensheim, Mulhausen and Turckheim. In 1675, it was at the retreat of Altenheim and at the relief of Haguenau and Saverne. In 1676, it fought in the combat of the Kokersberg. In 1677, it took part in the siege and capture of Freiburg which it garrisoned. In 1678, part of the regiment stormed the entrenchments of the Imperialists at Alberspach. Then the entire regiment, along with Touraine Infanterie stormed the post of Saint-Pierre. It then left Freiburg in July and took part in the attack against the bridge of Seckingen, in the storming of Kehl, in the storming of Strasbourg and in the siege of Lichtemberg, where its colonel, Montpeyroux, was mortally wounded. In 1679, the regiment took part in the combat of Minden.

En 1683, the regiment was at the training camp of Bouquenom on the Sarre. In 1684, it took part in the siege of Luxembourg.

In 1698, the regiment was at the training camp of Compiègne.

In February 1701, just before the outbreak of the War of the Spanish Succession (1701-13), the regiment was increased to two battalions. The first battalion initially served on the Rhine but was sent to Italy in July. In 1702, the first battalion took part in the defence of Cremona and in the capture of Luzzara and Borgoforte. In 1703, the first battalion was transferred to the Cévennes to quench the Camisards Uprising where it took part in a combat between Le Vigan and Anduze. It then joined the French army operating in Savoy. The first battalion then remained in Languedoc until 1706 when the whole regiment was recalled to Italy for the siege of Turin. On 8 September, it was virtually annihilated in the Battle of Turin, only 320 men managing to retire to Provence. In 1707, the remnants of the regiment took part in the defence of Toulon. It was then sent to the Army of the Rhine where it served until 1712 on the Sarre and in the Lines of Wissembourg. In 1713, the regiment took part in the sieges of Landau and Freiburg. At the end of the war, it was reduced to a single battalion.

In 1727, the regiment took part in the training camp on the Meuse. In 1730, it formed part of the Army of the Rhine and contributed to the capture of Kehl

In 1741, during the War of the Austrian Succession (1740-48), the regiment was sent to Juliers. In 1742, it was sent to Westphalia and contributed to the capture of Elnbogen and Kaaden and to the relief of Braunau. In 1743, it resupplied Egra and later returned to France where it was stationed at Fort-Louis on the Rhine. In 1744, it took part in the recapture of Wissembourg and in the affairs of Reichewaux and Augenheim. In 1745, it served in Alsace. In 1746, the regiment was transferred to Flanders where it contributed to the siege of the the Citadel of Antwerp, Mons, Saint-Ghislain and Charleroi, and fought in the Battle of Rocoux. On October 24, 1746, the regiment was increased to two battalions. In 1747, the first battalion took part in the sieges of Sluys, Sas-van-Ghent, Hulst and Axel. The whole regiment fought in the Battle of Lauffeld. In 1748, it was at the siege of Maastricht.

During the Seven Years' War, the regiment ranked 42nd and was under the command of:

En 1755, the regiment was at the camp of Richemont on the Moselle.

In 1756, the regiment was assigned to the defence of the Island of Oléron where he remained in 1757.

En 1759, the regiment was sent to Germany. In June, during the French offensive in western Germany, the regiment was part of the main army under the command of the Marquis de Contades and was deployed in the first line of the infantry centre. On August 1, the regiment took part in the Battle of Minden where it was deployed in the first line of the infantry right wing under the command of the Chevalier de Nicolaï. It was sent forward to support Touraine Brigade but was soon driven out of its defensive positions by a charge of an Allied cavalry brigade. In this battle, the regiment suffered heavy losses: Colonel Héraut de Séchelles, mortally wounded; Major de Vauconcourt, Captains du Petit-Thouars, Tellier and Florin, and Lieutenant de Bragelonne, killed; Captains Gérard, Perrin de La Beyssière and Darbois, and 10 lieutenants, wounded.

On July 16, 1761, the regiment took part in the Battle of Vellinghausen where it was brigaded with Aquitaine Infanterie.

In 1762, the regiment returned to France and was assigned to the service of the colonies and sent to Saint-Domingue. 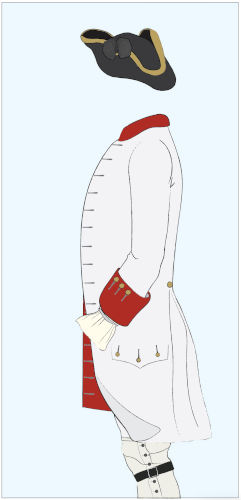 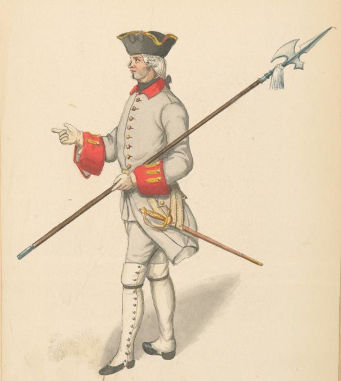 Ordonnance Colours: a white cross with four green cantons, each charged with a red rhombus. These ordonnance colours remained unchanged from 1671 to 1791.