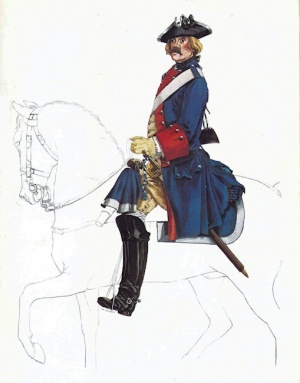 Trooper of Royal-Piémont Cavalerie in 1735 – Copyright: Michel Pétard
Only small details of the uniform and armament changed before the Seven Years' War

The regiment was originally raised in Turin by the Duke of Savoy. On August 9 1671, it was ceded to Louis XIV while he was arming against the Dutch Republic. On May 6 1690, the regiment became “Royal Piémont”.

During the War of the Polish Succession, the regiment initially served in Italy in 1734. In 1735, it was at Bayeux.

When the French Cavalry was reorganised on December 1 1761, the regiment was increased to 4 squadrons, each of them consisting of 4 companies of 40 troopers, for a total of 640 troopers. The 2 additional squadrons came from Talleyrand Cavalerie which was incorporated into Royal-Piémont Cavalerie. 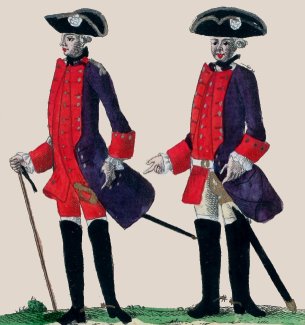 Royal-Piémont Cavalerie after the reorganisation of 1761 - Source: Raspe 1762 from Zahn's collection

In 1757, the regiment is first mentioned in service duty after the Convention of Klosterzeven, when it followed the main body, led by the Maréchal de Richelieu who encamped at Halberstadt from September 28 to November 5. The regiment was placed on the right wing of the second line. At the end of the year, it took its winter-quarters in the area of Aurich in Ostfriese, in the fourth line of the French army.

In 1759, the regiment was stationed at Évreux in Normandy.

By May 23 1760, the regiment was part of the Reserve of the second line of Broglie's Army, placed under the command of M. d'Auvet. On July 10, the regiment might have been attached to Prince Camille's Cavalry Corps who arrived too late to take part in the Combat of Corbach. On October 3, Ségur's Corps (including this regiment) was dispatched towards Hachenburg and Cologne. On October 13, the unit arrived at Neuss with Castries. On October 16, it fought in the Battle of Clostercamp where it was deployed in the second line of the left wing. At the end of the battle, the regiment along with 1 squadron of Balincourt Cavalerie, led by the Comte de Thiard de Bissy, came forward and handled very roughly the British squadrons who had come forward to cover the retreat of the Allies. However, the fight with the British cavalry gave the infantry time to rally, and to make their retreat in good order. 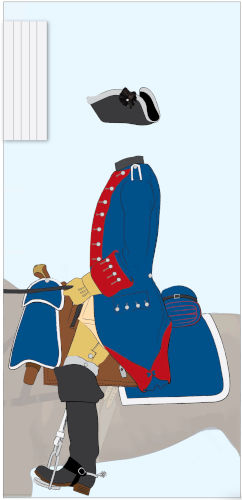