During the War of the Austrian Succession, a first regiment named Royal Barrois was created on November 1 1745 from the militia of the province of Lorraine.

During the Seven Years' War, the regiment ranked 105th, it was under the command of:

Somewhere between August 23 and September 6 1757, the regiment joined the Army of Saxony, led by Soubise, in the area of Erfurt and Eisenach. On September 27, it is brigaded with the Royal Lorraine and Beauvoisis regiments under M. de Rivray in the first line of the left wing of the Franco-Imperial Army. However, the regiment did not take part to the battle of Rossbach. At the end of the year, it took its winter quarters in Babenhausen in Hessen.

At the beginning of June 1758, the regiment left its winter quarters in Hanau County to reinforce Clermont's army on the Lower Rhine. By June 12, it was still on its way. On August 5, the regiment formed part of Chevert's corps and took part to the combat of Mehr where it was brigaded with Reding Infanterie to form the left wing. It did not behave very well and was broken by an enemy charge. In Mid August, after Ferdinand's retreat to the east bank of the Rhine, the regiment, as part of the army of the Lower Rhine now under Contades, recrossed the Rhine to follow the Allied army. On August 20, it was encamped near Wesel where it was placed in the centre of the second line. 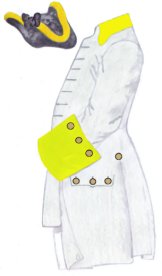 The colonel flag was white with a white cross. Ordonnance flags had a white cross with yellow and black opposed cantons. The cross had 12 golden fleur de lys in each of its branch.