The creation of this regiment was first considered in 1703, in a letter written by M. de Ricourt, the French envoy at the court of the Elector of Bavaria, to M. de Chamillard, the French War Secretary, expressing the desire of the Elector to give a Bavarian regiment to Louis XIV.. The disasters of 1704 and the following years delayed the project.

Finally, on January 1, 1709, during the War of the Spanish Succession (1701-13), a regiment was raised for the Comte de Bavière, a natural son of the Elector of Bavaria. It was formed with two companies of the Bavarian Gardes and six companies of Alsace Infanterie, containing exclusively soldiers born on the right bank of the Rhine. It would be the last regiment created during the reign of Louis XIV. In 1710, the regiment was employed in the Lines of the Lauter and on the Sarre. In 1711 and 1712, it served in Alsace. In 1713, it took part in the sieges and capture of Landau and Landau. It was later placed in garrison in Strasbourg.

On June 10, 1715, the regiment incorporated the disbanded German Reding Infanterie. The latter was re-established the same year and transferred to Bavarian service.

In 1727, the regiment quitted momentarily Strasbourg to take part in the training camp on the Saône.

In 1733, at the outbreak of the War of the Polish Succession (1733-35), the regiment joined the Army of the Rhine and served at the siege of Kehl. In 1734, it took part in the attack of the Lines of Ettlingen and in the siege of Philisbourg. At the end of the campaign, it was transferred to the Italian theatre of operation. In 1735, it contributed to the capture of Revere and Gonzague. In September 1736, it returned to France where it was stationed at Fort-Louis.

In 1741, during the War of the Austrian Succession (1740-48), in 1741, the regiment was among the first troops sent to the relief of Bavaria. It contributed to the occupation of Prague and was later placed in garrison in the city. In 1742, its two battalions and its grenadiers distinguished themselves during the defence of Prague. After the evacuation of the city, the regiment remained on the Danube with the other German regiments in the French service. In 1743, it took part in the defence of Eger (present-day Cheb/CZ) before retreating to France. In 1744, its 2nd battalion took part in the combat of Rheinzabern and the two first battalions, in the attack on the Lines of Wissembourg. The same year, they participated in the siege of Freiburg and in the capture of Burghausen. In 1745, they fought in the combat of Pfaffenhofen. In 1746, the depleted regiment campaigned on the banks of the Rhine. At the end of the year, the four battalions of the regiment (a fourth battalion had recently been raised) were sent to the relief of Provence. In 1747, they took part in the passage of the Verdon. The regiment then embarked aboard the fleet to relieve Genoa, taking part in the defence of this city. In 1748, it participated in the defence of Voltri.

In 1748, most of the regiment returned to France but a few piquets were sent to Corsica where they remained until 1753. On December 26, 1748, the regiment was reduced to two battalions.

During the Seven Years' War, the regiment ranked 101st and was under the command of: 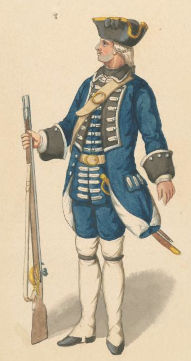 In April 1757, the regiment marched from Longwy to join the Army of the Lower Rhine, commanded by the Maréchal d'Estrées at Cologne, for the planned invasion of Hanover. At the end of June, it was at the camp of Bielefeld with d'Estrées's main corps. On July 26, the regiment was at the Battle of Hastenbeck where it supported the leading columns of the left wing. It then took part in the conquest of Hanover. At the end of the year, it took its winter-quarters in the first line of the French army at Viehenburg.

On January 10, 1758, the regiment took part in the surprise attack on Halberstadt. At the end of January, it was assigned to the army that Louis XV planned to send to Bohemia for joint operations with the Austrian Army. However, when an Allied army led by Ferdinand of Brunswick launched its winter offensive in western Germany in February, the regiment retired to the Rhine with the rest of the French army. From March 30 to April 4, it was in the second line of Clermont's Army in the camp of Wesel on the Lower Rhine. In the first days of June, as a French army prepared for an offensive in Hesse, the regiment was part of a detachment under the command of the Duc de Broglie who followed up Ysenburg during his retreat. On July 23, the regiment took part in the Combat of Sandershausen where it was placed in the first line of the centre. It stopped the Hessian cavalry who had previously broken the opposing French cavalry units. On October 4, the regiment formed a brigade with Royal Deux-Ponts Infanterie. This brigade was detached under the Marquis de Crillon to capture a bridge on the Lahn. However, the Allied army had already taken position behind this bridge and the brigade was forced to retire but managed to escape without losing a single cannon, nor a single man. On October 10, the regiment took part in the Battle of Lutterberg

On April 13, 1759, the regiment took part in the Battle of Bergen where it formed part of the reserve of the left wing deployed in regimental columns behind the Warthberg. It participated in the last charge which drove the enemy out of the village. In June, at the beginning of the French offensive in western Germany, the regiment was part of the “Right Reserve” under the command of the Duc de Broglie who had taken position at Friedberg in Hesse. On August 1, the regiment took part in the Battle of Minden where it was deployed in the first line of Broglie's Corps.

By the end of January 1760, the regiment had taken its winter-quarters in the first line of the French army. By mid March, the regiment was billeted in Friedberg, still in the first line. By May 23, the regiment was part of the right reserve of the first line of Broglie's Army, placed under the command of Prince Xavier. On July 14, Glaubitz's detachment (Anhalt Infanterie (3 bns), Royal Bavière Infanterie (3 bns), Bercheny Hussards and some light troops) marched from Marburg towards Ziegenhain, encamping at Vasbeck for the night, the regiment forming the left wing. On July 16 at 10:00 a.m., one battalion of the regiment was sent towards Marburg where it would be assigned to the guard of the field-bakery. The rest of Glaubitz's detachment was then attacked by surprise the Hereditary Prince of Brunswick in the Engagement of Emsdorf where the colonel-lieutenant of the regiment, the Comte d'Heilfemberg, was killed by a cannon shot at the beginning of the engagement. Its soldiers rallied around Lieutenant-Colonel, Baron de Falkenheim and fought till night. The regiment suffered so important losses during this engagement that it was sent back to France to replenish its ranks.

In 1761, the regiment was initially sent to Ostende but later returned to Germany.

In 1762, the regiment served on the Lower Rhine.

In 1763, the regiment was at Neufbrisach at the signature of peace. In May, it was sent to Landau; and in December, to Strasbourg. 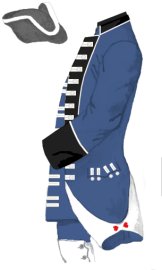 Colonel Colour: white field with a white cross; centre device consisting of an image of the Virgin Mary painted in the middle of the white cross; bordered with blue and white squares.

Ordonnance Colours: blue field with a white cross; bordered with blue and white squares; golden fleurs de lys in each branch of the cross.

The colours of the regiment remained unchanged from 1709 to 1780.