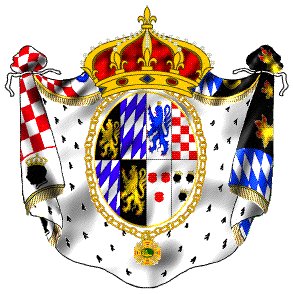 The regiment was raised on April 1, 1757 by the Duc de Deux-Ponts in his estates as well as in Alsatian bailiwicks. This family owned the County of Ribeaupierre (Rappolstein in German), and the bailiwicks of Bischwiller, Guttemberg, Seltz and Hagenbach. Outside France, it also owned the bailiwicks of Neucastel, Barbelroth, Cleeburg and Weylenbourg in Alsace.

On January 18, 1760, when the German infantry was reorganised, the regiment was reduced back to its original strength.

Somewhere between August 23 and September 6 1757, the regiment joined the Army of Saxony, led by the Prince de Soubise, in the area of Erfurt and Eisenach. Soubise considered the regiment as being of a particularly bad quality. On September 27, it was brigaded with I./Royal-Roussillon in the first line of the left wing of the Franco-Imperial Army. On November 5, the regiment was at the disastrous Battle of Rossbach where it was still brigaded with I./Royal-Roussillon in the first line of the centre. In this battle, the regiment lost Captain Geyer and Captain Stuart. At the end of the year, it took its winter quarters on the Kinzig River, at Hanau in Hessen.

At the end of January 1758, the regiment was assigned to the army that Louis XV planned to send to Bohemia for joint operations with the Austrian Army. However, when Ferdinand of Brunswick launched his surprise offensive in Western Germany, the regiment retreated towards Düsseldorf and Deutz with the bulk of Broglie's Army. It passed the Rhine on April 3 and 4. In the first days of June, Soubise's Army assembled near Friedberg in Hesse for an offensive in Hesse, the regiment was part of a detachment under the command of the Duc de Broglie who followed up Ysenburg during his retreat. On July 23, the regiment took part in the Combat of Sandershausen where one of its battalion was placed in the first line of the centre to support Royal Bavière Infanterie, while another battalion guarded the defiles at Sandershausen and the two remaining battalions guarded the town of Kassel. Three of its grenadier companies fought against the Hessian occupying the Ellenbach Woods on the French right wing. In this action, the regiment lost Captain Marquis d’Issembourg, killed. In September, it participated in an expedition on the Electorate of Hanover. It contributed to the capture of the mines of Klausthal. On October 10, it fought in the Battle of Lutterberg where it was deployed on the left wing of the second line of infantry.

On Tuesday January 2, 1759, at about 5:00 a.m., Nassau Prince Louis Infanterie presented itself before the Sachsenhausen Gate of Frankfurt and was admitted as previously agreed. As soon as it had entered the town, the regiment ordered the town-guard to deposit arms and to admit 5 other regiments (Beauvoisis (2 bns), Rohan Montbazon (2 bns), Rohan Rochefort (2 bns), Bentheim (2 bns) and Royal Deux-Ponts (4 bns)). These regiments then seized the artillery on the walls and all the other gates, easily capturing the city of Frankfurt. This very important town remained under French control for the last four years of the war. On April 12, Broglie's Army bivouacked near Bergen. He immediately deployed the regiment in the orchards near the village. On April 13, the regiment took part in the Battle of Bergen where it formed part of the first line of the right wing under the command of Prince Camille de Lorraine. The regiment was among the infantry entrenched in the village of Bergen. In June, at the beginning of the French offensive in Western Germany, the regiment was part of the “Right Reserve” under the command of the Duc de Broglie who had taken position at Friedberg in Hesse. However, it was detached to Frankfurt to guard the city. On August 1, 2 battalions of the regiment took part in the Battle of Minden where they were deployed in the first line of Broglie's Corps. The regiment took up its winter quarters in Frankfurt.

In 1761, the regiment was at Frankfurt am Main. It was sent to Bergstadt with other troops to force the Hereditary Prince of Brunswick to retire from Büdingen to Lich. On March 21, it took part in the attack on Stangerode, where the Colonel-Commandant Comte de Clozen was wounded. On July 6, it accompanied the Carabiniers, under the Marquis de Poyanne, to Erwitte to screen Lippstadt. On July 15, it took part in the Battle of Vellinghausen where it was attached to the vanguard of the right column. It made itself master of the village of Vellinghausen and of the nearby castle and drove the Allies back beyond the abattis defending their camp. It then took position in these abattis and in a nearby redoubt. Granby’s Corps vainly tried to drive the regiment out of these defensive positions. In the evening, the regiment was relieved by Aquitaine Infanterie and Rouergue Infanterie. On August 19, as it was marching towards the camp of Fürstenberg, the regiment was attacked near Oldenburg by a corps of English and Scottish grenadiers but it drove them back. On September 2, it made itself master of the Forest of Sababurg. On September 3, it captured the Castle of Sababurg and its garrison. On October 10, it captured Wolfenbüttel and its garrison.

In 1762, the regiment served in Western Germany. When it returned to France, it was stationed at Thionville.

In May 1763, the regiment was transferred from Thionville to Zweibrücken. 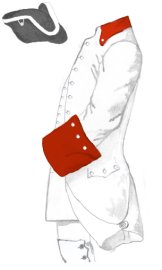 There seems to be important confusions concerning the colours of this regiment. Susane in 1850, Bouillé (Les drapeaux français- étude historique - 1875), Pajol in 1880 and Mouillard, all describe the colours illustrated hereafter. Furthermore, they all indicate that there were two successive colour patterns: a first in 1757 and a second in 1770. However, the manuscript "Troupes du Roi, Infanterie française et étrangère, année 1757, tome I", supposedly of 1757, depicts the colours that these four authors consider as the 1770 pattern.

Initially, the colonel colour was probably white with a white cross.

Initially, the ordonnance colours had a white cross and purple and crimson cantons.

The article incorporates texts from the following books, which are now in the public domain: