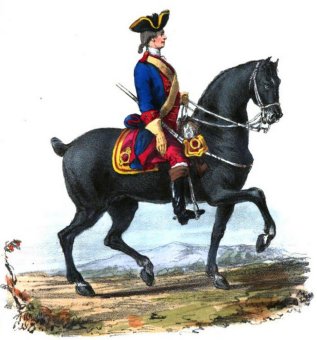 On July 1, 1751, when a Royal warrant reorganised the British army, the regiment remained unnumbered.

On July 31, 1760, the regiment fought in the Battle of Warburg where it was deployed in the first line of Granby's cavalry. Granby charged and broke the French cavalry right wing then wheeled and hit the French infantry in the flank, winning the day for the Allies.

According to a document entitled “The Establishment of H.M. Guards, Garrisons, and Land Forces,” dated December 25, 1735, a kettle-drummer was allowed to each troop.

Lawson, Cecil C.P.: A History of the Uniforms of the British Army - from the Beginnings to 1760, vol. II

Mills, T. F.: Land Forces of Britain the Empire and Commonwealth through the Way Back Machine