The Régiment Royal, was raised by the Duc d'Arpajon according to a commission issued on January 20, 1656. In 1657, it took part in the siege and capture of Montmédy and in the sieges of Saint-Venant, Wates and Mardyk, In September, it worked at the rebuilding of the fortifications of Bourbourg. In 1658, it initially campaigned in Lorraine before being transferred to Flanders in July. It then took part in the investment and capture of Gravelines. Afterwards, it went to Menin to assume garrison duty.

After the death of Gaston, Duc d'Orléans, brother of Louis XIII, an edict dated February 13, 1660 merged his regiment (Régiment de l'Altesse raised on December 20 1644) with the Régiment Royal: the former forming the first battalion of the new unit and transmitting it its seniority (41st); the latter forming the second battalion and eventually giving it its name. Because of this amalgamation of two regiment, Royal Infanterie exceptionally carried two white and two colonel colours for several years.

In 1660, immediately after its formation, the new regiment marched to Lorraine where its two battalions garrisoned Nancy and Thionville. In 1663, the regiment took part in the capture of Marsal. After this campaign, it was increased to 40 companies. In June 1664, the 20 senior companies went to Toulon and embarked on a fleet who sailed for Africa. On July 23, they landed at Djigelli and immediately occupied the “Fort du Marabout” closing the entry of the harbour. After this expedition, the regiment remained in the region of Toulon till 1666.

In 1718, the regiment was transferred from Lille to Poitiers; in 1724, to Cambrai; in 1726, to Toul; in 1727, to Saarlouis; in 1728, to Maubeuge; and in 1729, to Metz where it worked at the fortifications until 1730. In 1732, it was at Douai. In 1733, at the outbreak of the War of the Polish Succession (1733-35), the regiment initially served on the Rhine and took part in the siege of Kehl. It was then increased to three battalions. In 1734, it took part in the capture of Trier and Trarbach, and in the siege and capture of Philisbourg. It was then sent to Italy. In 1735, it took part in the capture of Gonzague, Reggiolo and Revere. In 1736, it returned to France where its battalions were distributed between Montpellier, Nîmes, Béziers and Carcassonne. It later occupied Perpignan, Collioure and Mont-Louis.

In 1749, the third and fourth battalions of the regiment were disbanded. The regiment then successively garrisoned Metz, Landau, Grenoble, and Fort-Barraux, Romans and Embrun. In 1753, it was at the camp of Beaucaire. It remained in Languedoc and Vivarais until 1756.

On the eve of the Seven Years’ War, the regiment counted two battalions and had prévôté (provostship). On December 21 1762, it was increased to four battalions by incorporating the disbanded regiment of Cambis Infanterie.

In 1756, the regiment was sent to Toulon and was among the French regiments who took part in the expedition against the island of Minorca. It left Toulon on April 9 and landed on the beach of Ciudadella on April 18. From May 8, it participated in the siege of the British Fortress of San Felipe de Mahon. On May 27, when the French army assaulted the fortifications, the Royal brigade was placed on the right wing and attacked Fort Saint-Charles and the redoubt known as "Marlborough". In this attack, the regiment lost Captains La Grationnaie, La Revetison, Montenaut and de Chièvre, wounded. The fortress capitulated the following day. 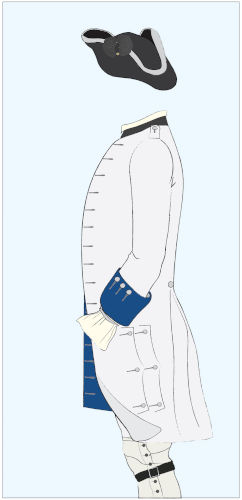