In 1755, a detachment of 24 NCOs and men of the Royal Regiment of Artillery, under the command of a 1st lieutenant was sent from Woolwich to Dublin to form the kernel of a new artillery regiment attached to the Irish establishment.

On April 1 1756, this detachment, which had received additional men and had been reorganised, became the “Artillery Company in Ireland” . It consisted of:

In 1760, the company was considerable increased and renamed the >Regiment of Royal Irish Artillery”. It now included:

During the Seven Years' War, the company, and later the regiment, were commanded by:

At the conclusion of peace in 1763, the regiment was reduced.

In 1778, the regiment was augmented from four to six companies.

The regiment does not seem to have participated in any campaign. It probably remained in Ireland during the entire conflict.

The uniform seems to have been identical to the uniform of the Royal Regiment of Artillery which is reproduced here. 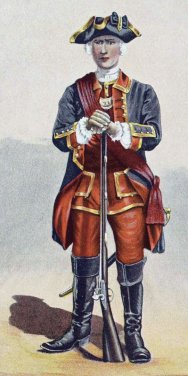 This article is mostly an abridged and adapted excerpts from the following book now in the public domain: