Somewhere between August 23 and September 6, 1757, the regiment joined the Army of Saxony, led by the Prince de Soubise, in the area of Erfurt and Eisenach. On September 27, it was brigaded with Royal Barrois Infanterie and Beauvoisis Infanterie under M. de Rivray in the first line of the left wing of the Franco-Imperial Army. However, the regiment did not take part in the Battle of Rossbach. At the end of the year, it took its winter quarters in Witzenhausen in Hessen.

On July 13, 1759, during the French offensive in western Germany, the regiment was part of a corps, under M. de Beaupréau, sent forward by Contades to Eidinghausen near Gohfeld to support Broglie at Minden. On July 14, this corps passed the Weser and marched to the French camp near Minden where it replaced Broglie's Reserve. 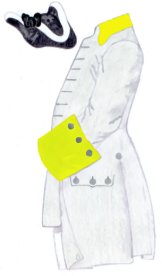