The regiment was raised on December 25 1747 by Pierre-Grégoire, Comte d'Orlick de La Ziska.

During the Seven Years' War, the regiment ranked 116th and was under the command of:

On January 18 1760, when the German Infantry was reorganised, the regiment was disbanded. Its single battalion was incorporated into Royal Suédois Infanterie.

In 1757, the regiment joined the Army of the Lower Rhine commanded by the Maréchal d'Estrées for the planned invasion of Hanover. At the end of June, it was at the camp of Bielefeld with d'Estrées's main corps. On November 5, under the Comte de Lorges, it took part in the disastrous Battle of Rossbach where it was placed in the second line of the centre. At the end of the year, it took its winter-quarters in the first line of the French army at Celle (Zell) on the Aller River.

At the end of January 1758, the regiment was assigned to the army that Louis XV planned to send to Bohemia for joint operations with the Austrian Army. However, when Ferdinand of Brunswick launched his offensive in western Germany in February, the regiment retired on the Rhine with the rest of the French army. From March 30 to April 4, it was in the first line of Clermont's Army in the camp of Wesel on the Lower Rhine. By July, it had been transferred to Soubise's Army assembling near Friedberg in Hesse.

By June 1759, the regiment garrisoned Giessen.

On September 13 1760 at daybreak, the regiment was part of M. de Stainville's Corps who was marching towards Frankenberg when it clashed with a retiring Allied corps between Rhadern and Münden/Ork. Both forces were separated by a wood and a small stream flowing into the Eder. Stainville reinforced his left with Bouillon Infanterie (2 bns) placed in the Castle of Lichtenfels. Combat began around 10:00 a.m. when M. de Scey at the head of Du Roi Brigade and M. de Melfort with the Légion Royale advanced. The Allies occupied positions on a steep hill. Nevertheless Auvergne Infanterie stormed these positions on the double. Fersen counter-charged the dragoons of the Légion Royale at the head of his cavalry but was made prisoner with some of his men. Then, the grenadiers and chasseurs of the brigades along with the dragoons of Légion Royale; with du Roi, Auvergne, Bouillon and Royal-Pologne infantry brigades pursued the Allies up to the village of Neukirchen near Sachsenberg. Bülow was forced to abandon some guns to pass the defiles. In this action M. de Stainville took 400 prisoners, 8 pieces and considerable baggage. 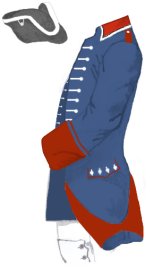 N.B.: the manuscript of 1757 illustrates a very different colonel colour: white field sown with golden fleurs de lys; centre device consisting of a golden sun surmounted by a blue scroll; the white eagle of Poland underneath.