The unit was raised in 1705 as the personal Leib-Squadron of A. D. Menshikov who was the closest associate of Peter I and the second most important person in Russian Empire. In 1709, during the Great Northern War (1700-1721) the squadron, counting about 125 men, took part in the combat of Oposhnya and in the battle of Poltava.

In 1719, it was planned to create a “Leib-Regiment” on the base of Menshikov's Leib-squadron (25 officers, 435 NCOs and dragoons and 48 non-combatants), Sheremetev's own “Home company” (2 officers, 50 NCOs and dragoons) and the Squadron of the Saint-Petersburg Governorate (2 officers and 343 NCOs and dragoons). But these plans were upset by the possible entry of Great Britain into the Great Northern War and all enlisted units served on posts between Kronshtadt and Koporje. Finally, all the aforementioned units were combined into single regiment on March 18, 1721. Even though the new regiment had in fact guard duties, it was not included as a guard unit and was rather designated as the “Kronshlotskiy Dragoon Regiment”. Its colonel was Alexander Borisovich Buturlin.

In 1722 and 1723, the regiment took part in the Russo-Persian War, however it was kept in reserve.

On January 11, 1731 the regiment was renamed “Horse Guard” by Empress Anna Ioanovna who also finally promoted it to guard rank. Usually the regiment was named “Leib-Guard Horse Regiment”. In 1733, it was transferred to Saint-Petersburg.

The regiment counted five squadrons and was stationed in Saint-Petersburg. It consisted of 44 officers and 1,332 men including 267 non-combatants.

The title of colonel belonged to the Emperor (Empress) and the regiment was in fact commanded by a lieutenant-colonel. When the latter rank became an honorary title too, effective command of the regiment was confided to its majors. 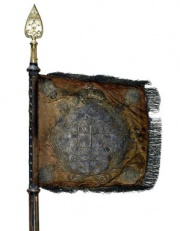 Garde à Cheval still carried standards of the 1731 pattern, measuring 60 cm by 70 cm fringed in gold with a silver braid. The flagpole had a flat gilt finial.

Regimental Standard: white damask field centre device: an two headed Imperial Eagle with gold crowns bearing the arms of Moscow on a breastplate encircled by the necklace of the St. George’s Order and surmounted by a gold crown. Under the centre device: two branches with a ribbon all in gold. In each corner: the crowned imperial cipher within a wreath all in gold.

The section on origin and history of this regiment is mainly based on two works:

Roman Shlygin for the information on the origin and history of the regiment.