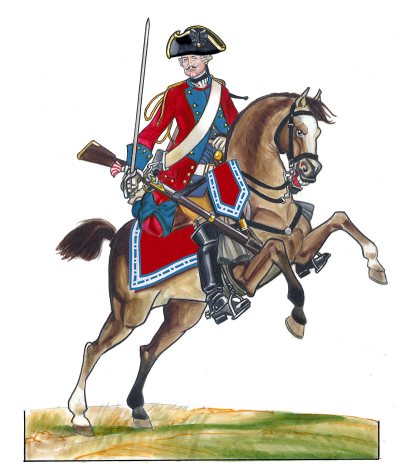 On January 29 1718, emperor Charles VI issued a warrant to allow margrave Friedrich Wilhelm von Brandenburg Anspach to raise a regiment of dragoons at his own expense. The new unit was initially stationed at Donauwörth in Bavaria. However, in May of the same year, the regiment was ordered to march to Milan. By the end of July 1718, the unit was in the region of Naples. On September 2, it entered into the Neapolitan territory in the Abruzzo where 8 companies were deployed at Santa Maria di Capua and 5 others (including the company of grenadiers) went to Aversa.

When war broke out with Spain in 1719 the regiment, then consisting of 838 dragoons and 877 horses, joined the army of field marshal count Mercy on May 27 in Sicily. On July 20, the regiment took part to the battle of Francavilla. In 1720, it retired from Sicily and took its quarters in Neapolitan territory. In 1728, the unit was transferred to North Italy where its was partly stationed in Mantua, partly in Milan.

During the War of the Polish Succession, the regiment served under field marshal count Mercy once more. On June 29 1734, it was at the battle of Parma. On September 15, it took part to the attack of field marshal count Königsegg on the camp of Quistello. On September 19, it fought at the battle of Guastalla. In 1735, the depleted regiment was transferred to the Reserve led by the prince of Sachsen-Hildburghausen. In October of the same year, after the peace of Vienna, the regiment took its quarters in Lombardy where it remained during the war against the Turks from 1736 to 1739.

During the War of the Austrian Succession, the regiment was ordered to join the corps of count Khevenhüller in Upper Austria in November 1741 to drive back the Franco-Bavarian. On December 30, it made its junction with the Austrian corps at Waidhofen an der Ybbs and took part to the winter expedition of 1742. In September of the same year, the regiment operated with Khevenhüller's army in Upper Austria and Bavaria. It took its winter quarters in Ried and Mansee on the Inn. In May 1743, the regiment was with count Hohenembs' corps operating in the region of Altheim and charged to observe the town of Braunau. Mid May, this corps advanced on Braunau to prevent the crossing of the Inn by the French. The regiment then moved to Neumarkt near Salzburg. In the Autumn, it joined the army of prince Carl von Lothringen on the Upper Rhine and retired on Donauwörth. In October, it took its winter quarters at Staubing. On July 11 1744, the regiment took part to a raid near Lauterbach. In August, it retired to Bohemia with the army of prince Carl von Lothringen and took its winter quarters in the region of Jassena. However, during the winter, it was transferred to the district of Hradish in Moravia. In April 1745, the regiment retired to Upper Austria with the Austrian army. On May 22, it fought the Prussian cavalry at the combat of Neustadt, covering the Esterhazy and Olgiloy infantry regiments. During this combat, it lost 5 men killed, 21 wounded and 6 missing. On May 27, about 100 dragoons of the regiment took part to a raid on Kosel led by colonel baron Buccow. For the rest of this campaign, the regiment remained on the Austro-Prussian frontier. On October 20, it was attacked at Hatschein, along with two hussar regiments, by the Prussian Wartenberg Hussars. A corporal of the regiment was captured and 21 troopers wounded. On December 25, after the peace of Dresden, the unit took its quarters in the district of Pressburg (actual Bratislava) in Slovakia. In the spring of 1746, the regiment was ordered to North Italy to fight in count Browne's army against the Franco-Spanish army. It Joined Browne's army in June. On July 22, the regiment fought on the Trebbia and, on August 10, at the battle of Rottofreno. In September, it took its quarters in the region of Mantua. In 1748, it was transferred to Milan.

From 1748 to 1753, the regiment was stationed in Lombardy. It was then transferred to the district of Pest in Hungary.

Following a decree of February 6 1760, the regiment was re-equipped with lighter horses and reorganised as a regiment of Chevauxlegers.

In December 1760, the regiment was reorganised as a regular dragoon regiment. 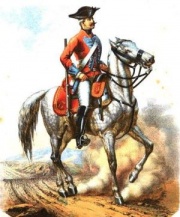 At the end of March 1757, the regiment moved to Upper Silesia and then joined Daun's main army on May 8 near Böhmisch-Brod (actual Český Brod). The regiment, counting 650 horses was incorporated into the second line of the cavalry left wing led by general of cavalry count Stampach. On June 18, it took part to the battle of Kolin where it distinguished itself along with the Jung Modena Dragoons. They both successfully attacked the Prussian units with great determination but suffered heavy losses. The regiment lost lieutenant Titz and 7 men killed; lieutenant-colonel count Pompeati, captains Tumlier and von Potz, lieutenant Heimack and ensign Alexandrini along with 29 men wounded; and 2 officers and 14 men missing. Daun signalled the distinguished service of the regiment in his relation of the battle to the empress. Colonel O'Donell was promoted general and lieutenant-colonel count Pompeati colonel. In July, the regiment operated in the region of Leitmeritz (actual Litoměřice), observing the retreat of the Prussian army. On Sepyember 7, when general Nádasdy attacked Winterfeldt's corps isolated at Moys, the regiment was deployed in the second line of the right wing under major-general O'Donnel. Along with the Saxon Chevauxlegers regiments, it covered the flanks of the infantry. On November 12, the regiment was part of count Nadasdy's force at the capture of the fortress of Schweidnitz. On November 22, the regiment fought at the battle of Breslau where it was deployed in the second line of the cavalry right wing of Nádasdy's corps. Finally, it was present at the disastrous battle of Leuthen where it was deployed in the second line of the cavalry Reserve under marshal O'Donell on the far left of the Austrian positions as part of Nádasdy's Corps. During this battle, lieutenant-colonels baron Muffel and von Haake were taken prisoners, major von Feilitzsch was wounded. Afterward, the regiment was part of the Austrian force defending the town during the siege of Breslau from December 10 to 20. After the capitulation, it took its winter quarters in Politschka, Ullersdorf and Borowa in Bohemia. During the campaign of 1757, the regiment had lost 1 officer, 3 non commissioned officers and 48 troopers killed.

At the opening of the campaign of 1759, the regiment joined the Austrian main army under the command of Daun who advanced from Bohemia into Saxony. Daun manoeuvred to prepare the junction of an Austrian corps with the Russian army. The regiment was not involved in any major action. On September 16, it was ordered to leave the camp of Bautzen and to join the corps of baron Loudon which took its winter quarters in Silesia.

Following a decree of February 6 1760, the regiment was re-equipped with lighter horses and reorganised as a regiment of Chevauxlegers. On May 31, at the combat of Töpliwoda, 600 dragoons of the regiment along with 300 hussars attacked the Mosel infantry regiment which formed a square and retired to Neisse. During this action, the regiment lost 4 officers wounded and 20 men killed or wounded. On June 23, baron Loudon defeated the Prussian corps of general Fouquet at Landshut. The dragoons of the regiment along with those of Löwenstein Dragoons, Nadasdy Hussars and Bethlen Hussars led by general Nauendorf attacked a Prussian square and broke it. General Fouquet who stood inside this square was taken prisoner by colonel baron Voith of the Löwenstein Dragoons. At this battle, the regiment lost 1 man killed and 8 wounded. On August 15, at the battle of Liegnitz the regiment lost lieutenant Meiner von Löwenstein and 6 men wounded, and 4 men reported missing. In October, the regiment was assigned to Wolfersdorf's corps covering the region of Landshut and observing the Prussian force occupying Schweidnitz. It later took its winter quarters in Silesia.

At the beginning of the campaign of 1761, the regiment was assigned once more to Loudon's corps operating in Silesia. On July 31, during the retreat of major-general count Draskovich to Jägerndorf, lieutenant-colonel count Christallnig along with 70 troopers was captured. The regiment took its winter quarters in Jägerndorf.

In the campaign of 1762, the regiment was part of general Beck's corps. It fought at the battle of Reichenbach on August 16 where it lost 1 man killed.

After the peace of Hubertusburg, the regiment took its quarters in Lombardy. 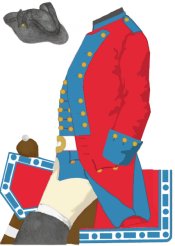 The Bautzener Bilderhandschrift shows no lapels, white buttons and a silver aiguillette.