The regiment was raised in 1657 for Jobst Baron von Knigge.

In 1731, the regiment assumed garrison duty in Hungary, afterwards it was stationed in Vienna for a short time and returned to Hungary in 1737. The same year, Carl Count Saint-Ignon was appointed proprietor of the regiment.

At the outbreak of the War of the Austrian Succession, in 1740, the regiment was attached to Field-Marshal Lobkowitz's Corps.

In 1742, Lobkowitz's Corps (7 cuirassier rgts, 3 dragoon rgts, 5 infantry rgts) operated independently, defending the big magazines at Iglau (present-day Jihlava/CZ). At the beginning of February, Lobkowitz was informed that a Franco-Saxon army was marching on Iglau. Lobkowitz retreated to Southern Bohemia with his entire corps. On May 25, the French under Maréchal de Broglie and Belleisle attacked Lobkowitz's Corps on the march near Zagaj [1] (present-day Zaháj/CZ). The Saint-Ignon Cuirassiers were at the end of the column and were not involved in the engagement. Lobkowitz then retreated to Budweis (present-day České Budějovice/CZ). After some days, 20,000 French under Belleisle threatened Budweis and Lobkowitz asked Prince Charles de Lorraine for help. In July, when Prussia retired its troops from Bohemia, the French tried to avoid a battle. From July 2, Saint-Ignon Cuirassiers were attached to the second line of the left wing under FML Karl Paul Pálffy. On July 6, Lobkowitz made a junction with the main army of Charles de Lorraine near Wodnian (present-day Vodňany/CZ). The regiment took its winter-quarters in Swabia.

On January 14 1744, Karl Marquis Canon de Ville was appointed colonel and commander of the regiment. In the Spring of 1744, the Austrian main army marched against France. From May 29 to 31, it passed the Neckar on 5 bridges. On May 31, the Saint-Ignon Cuirassiers, belonging to the seventh column passed the Neckar at Heilbronn. It's difficult to follow the next movements of the regiment.

On the eve of the Seven Years' War, the regiment counted 6 squadrons and a company of carabiniers. For battles, the latter was usually converged with other similar companies to form an elite unit.

The successive regiment inhaber were:

The regiment was disbanded in 1775.

In June 1756, at the beginning of the Seven Years' War, the regiment was stationed in Eastern Hungary and counted 795 men and 774 horses. On September 6, it was decided in a conference in Vienna to transfer the regiment to Bohemia.

On July 6 1762, the regiment took part in the Combat of Adelsbach. 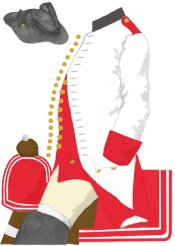 The Bautzener Bilderhandschrift of 1762 shows a lace on the tricorne, a red neckstock and 3 brass buttons on each cuff.

The aprons of the trumpets were yellow with black cipher. No information has been found about the decoration of the kettledrums.