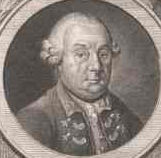 Salenmon (original name Salomo) was born in 1710 in a Jewish family in the free city of Danzig then under Polish rule. He was first educated at home.

At the age of 17, Salenmon entered in the Polish military service. From 1727 to 1745, he served in Regiment Flemming. During his service, he ennobled himself by adding a “von” to his name.

In 1745, after a duel with an officer, Salenmon was forced to quit the Polish service. He then entered into the French service and fought in the Austrian Netherlands during the last years of the War of the Austrian Succession (1740-48), attaining the rank of captain in Nassau Prince Louis Infanterie. In 1745, he took part in the siege and capture of Tournai, Ghent, Oudenarde and Bruges; in 1747, in the Battle of Lauffeld.

After the war, when the Nassau Prince Louis Infanterie was reduced, Salenmon resigned and departed for Saxony where he married a wealthy widow named von Reibnitz.

On September 21, 1756, when Heinrich Detlev von Kalben raised the Prussian Freibataillon von Kalben, he convinced his old friend Salenmon to command a company of this new unit. The latter soon distinguished himself and was promoted to major in December of the same year.

From March 26 to August 25, 1757, Salenmon at the head of a small garrison defended the Fortress of Geldern which had been completely encircled by French troops under the Comte Beausobre while the Main French army proceeded to the French invasion of Hanover. We he was finally forced to surrender, Salenmon obtained free withdrawal for the garrison. On November 22, he fought in the Battle of Breslau where he was wounded at the head while his superior, Kalben, was mortally wounded. Salenmon then assumed command of the former Freibataillon von Kalben as lieutenant-colonel. At the head of his battalion, Salenmon then took part in the campaign of Saxony.

In the spring of 1758, his unit took part in the invasion of Moravia. On October 14, it fought in the Battle of Hochkirch.

In the spring of 1759, his unit took part in an incursion in Poland. On September 2, it was present at the Combat of Sorau. On November 20, it fought in the Battle of Maxen where it was forced to surrender as prisoners of war.

On March 5, 1760, Salenmon was directly promoted lieutenant-colonel to major-general for his conduct at Wittenberg in 1757.

On October 14, 1760, when the Fortress of Wittenberg had to surrender to the Reichsarmee after a siege of two weeks, Salenmon, together with the Plotho Fusiliers (ex Saxon Prinz Gotha Infantry), the II./Garnisonregiment III, one company of the Neues Garnisonregiment, 40 men of the Freibataillon Salenmon, 300 convalescents and the Jägers of his garrison, was made prisoner. He and his garrison were transported to Swabia.

In 1762 in Ulm (?), Salenmon had a duel with Major Krage, who was commander of the guard. According to a lieutenant, Krage had wanted to drink brotherhood with Salenmon, who had refused. Krage was wounded and died after four days, Salenmon was arrested and transported to the small town of Weißenhorn. After four weeks, he was relieved of his arrest; Major Krage prior to his death had advocated against a punishment for Salenmon. The same year, Salenmon was exchanged. A nice detail: he travelled in a carriage of six, while his officers only had a carriage of four horses.

In 1763, after the Treaty of Hubertusburg, when the Frei-Infanterie Salenmon was incorporated in the Garrison Regiment No. IX and placed in garrison in the Fortress of Geldern, Salenmon was appointed commandant of the fortress.

In 1772, Salenmon was injured at the head during a duel.

In 1778, at the outbreak of the War of the Bavarian Succession (1778-79), Salenmon was charged to raise an new “Freibataillon.”

By 1787, Salenmon assumed the charge of commandant of the Fortress of Wesel. That year, he asked to be relieved from this command and was authorised to do so.

Salenmon then lived in Geldern until the occupation of this fortress by the French Revolutionary armies. He then fled to Halle where he died in 1797.

N.B.: All paragraphs depicting Salenmon's actions during the Seven Years' War are mostly derived from our articles depicting the various campaigns, battles and sieges.

Klaus Roider for additional information on the life of Salenmon