This Swiss regiment was raised on June 1 1733 in the canton of Graubünden (Grisons). For this reason, it was also known as "Salis-Grisons".

On April 3 1757, one battalion of the regiment was assigned to the Corps of six battalions blockading the duchy of Gueldre, it occupied Stralen and Walbeck. From April 27 to June 17, the regiment was part of the reserve under the prince de Soubise. On July 26, at the battle of Hastenbeck the regiment formed a brigade with Reding Infanterie. This brigade was part of the reserve of the right wing. It covered the edge of the woods to support the attack of the Champagne Brigade on a strong redoubt at the outskirt of a forest. After the Convention of Kloster-Zeven on September 8, it followed the main body, led by the maréchal de Richelieu, who encamped at Halberstadt in Prussia from September 28 to November 5. The regiment was placed in the centre of the second line. At a certain time, it was transferred to the Army of Saxony led by Soubise. On November 5, under the comte de Lorges, it took part to the battle of Rossbach where it was placed in the second line of the centre. At the end of the year, it took its winter quarters in the second line of the French Army at Bad Münder and Hessisch Oldendorf.

At the end of January 1758, the regiment was assigned to the army that Louis XV planned to send to Bohemia for joint operations with the Austrian Army. In March, during the Allied winter offensive in West Germany led by Ferdinand of Brunswick, the regiment was part of the French garrison of Minden which was attacked by an Allied corps led by general Kilmanseg. On March 15, the garrison of Minden surrendered without opposing any serious resistance. The regiment was later exchanged. By July, it had joined Soubise's army assembling near Friedberg in Hesse. 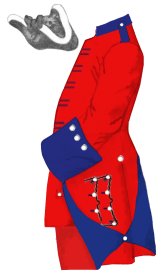