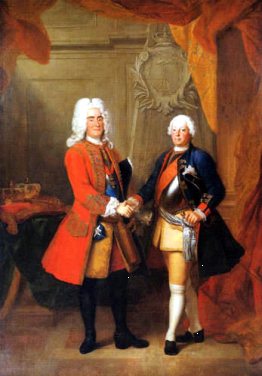 August II Grand-Duke of Saxony and King of Poland shaking hands with the King of Prussia in 1728. By 1756, friendship between the two nations was history. - Source: de Silvestre, Dresden, Wikipedia

In 1728-1730, the Saxon Army, after a long period of war against Sweden, underwent a complete re-organization. There existed three ranks of generals in the Saxon general HQ:

A fourth intermediate rank of general was in existence, the General of Service or in german General der Waffengattung.

In 1730 the whole General Staff consisted of a total of 25 officers:

To the general staff were added: 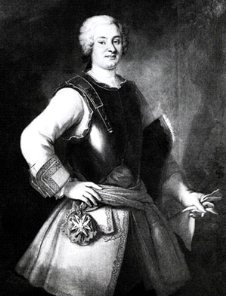 General von Rutowsky wearing a cuirass and Koller around 1730. Over the black enameled iron plastron, from the left shoulder to the right flank, hangs the blue silk ribbon of the white eagle. Around the waist is clearly visible the silk silver/crimson officer’ sash. - Source: Wikipedia

On September 19 1756, when the undeclared war seemed imminent, the Saxon Army under the command of the Field-Marshall Count von Rutowsky was ordered to hastily reach the defensive position around Pirna. (for a detailed order of battle, see Order of Battle of the Saxon Army at Pirna)

The various infantry units were under the command of:

The whole cavalry was under the command of the General of the Cavalry Chevalier de Saxe. Under him served the Generals of Cavalry Furst von Anhalt and von Arnim.

The general HQ was situated in the village of Struppen.

In Koenigstein, General von Pirch was in command.

When the whole Saxon Army surrendered to the Prussian King, the officers corps was left free to serve under the flags of Frederick II or retire “on parole”, promising that they would not serve against Prussia for the duration of the war. In this way, the “old generation” of generals was wiped out. When a Saxon corps in French pay was raised and four Saxon cavalry regiments entered the Austrian service, a new group of generals was nominated. 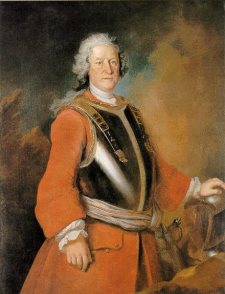 At the beginning of the XVIIIth century, a general of the Saxon Army on the field was quite easily recognizable by the troops even if his “costume” was still not regulated. The cut of his red coat, of civil derivation, was the same as for the rest of the army even if the tissue was, of course, of a finer quality. The rank, on parade, was distinguishable from the amount of gold embroideries on the front, the handcuffs and the turnbacks of the coat. When on campaign, a high ranking officer could wear a simpler coat. In this case the gold embroideries were limited to his waistcoat.

The first attempts to regulate the general officers uniforms were done in France in 1724. Then Spain followed. In Austria the first regulation of the matter was published only in 1751.

In Saxony, on March 7 1735, the whole general staff received their first officially regulated uniform. A full dress (Paradeuniform) and a service dress (Interimsuniform) were prescribed for all the ranks.

In full dress the generals could or not wear a cuirass (both a black enameled and a white polished one) with golden fittings. The general’s buttons were gold as the feathered tricorne edge except for the Kurfurst August II who had a silver laced uniform. Generals could wear riding boots (Stiefel) or gaiters (Gamaschen). Generals of artillery had a green coat faced red. Officers wore a sash (the oldest officer’s rank distinction) around the waist. The loose part of this sash (Trageweise) could be left hanging on the right or the left side of the body, indifferently. The horse furniture saddlecloth (Schabracke) and cover of the pistol holster (Schabruncke) of generals were edged in gold.

In 1747 the fine details of the gold embroideries of the general’s ranks were carefully specified and the uniforms for the lower ranks of the staff officers or general adjutants (captains and lieutenants) were prescribed.

On April 4 1750 and November 29 1752, a new uniform for generals was prescribed. This new uniform was officially adopted on February 10 1753. The field colour of the coat was changed again in a dark shade of red known as Ponceau Rot. It was the same colour as the Leibgrenadiergarde’s coat. The facing colour was of the same red. The ranks were distinguished by a double lace of a larger and a thinner gold lace on the front of the coat, around the horizontal pockets, around the handcuffs edges for lieutenant-generals (following the French style of time “à la Bourgogne”). For major-generals, a single thinner gold lace edging the front of the coat, the pockets and handcuffs was prescribed. The collar of the coat was edged by a single gold lace larger for lieutenant-generals and thinner for major-generals. The waistcoat was now of a straw colour with gold embroidered lace according to the rank. The headgear was a tricorne hat edged in golden lace, festooned for General en Chef. All generals hat had white feathering. The cuirass on field service was no more in use until 1759, when a precise order on the matter, issued in Warsaw,, reached the Saxon Corps in French pay, reintroducing it as a protection measure after the death in combat of the General von Dyrren. The cuirass should be worn under the coat and over the waistcoat when on mounted service. 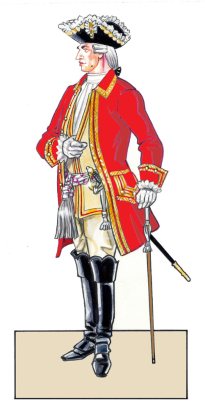 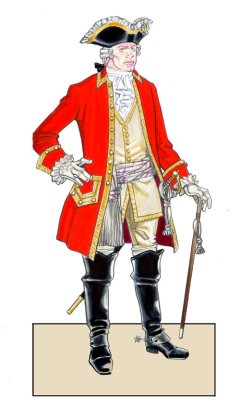 Dr. Marco Pagan for the initial version of this article and Franco Saudelli for the accompanying plates.