In 1713 the regiment belonged to the reigning Markgrave of Ansbach-Bayreuth. It entered service in King Augustus II army as a regiment of dragoons. Till 1717 it served in the campaigns in Poland and Pomerania, and with the 1717 reduction, it incorporated the remainder of the Queen’s cuirassiers.

In 1729, the regiment was named Karabiniersgarde and, with contributions of the other cavalry regiments, it was augmented and much embellished.

During the War of the Polish Succession, the regiment served in Poland from 1733 to 1735.

In 1749, the regiment was reduced by four companies.

By 1754, the regiment garrisoned Warsaw.

From 1757 to 1763, the regiment fought alongside the Austrian armies.

In 1764, the regiment was renamed Karabiniersregiment.

In 1756, during the invasion of Saxony by the Prussians, the regiment was stationed around Krakau (present-day Kraków) in Poland. By October 11, it counted 508 men and 448 horses. Being stationed in Poland, it avoided forceful incorporation into the Prussian army like the Saxon units who surrendered at Pirna. In November, a few days after his arrival in Warsaw, the Elector of Saxony opened negotiations with the Court of Vienna about the use of his 6 remaining cavalry regiments stationed around Krakau (present-day Kraków) in Poland in conjunction with the Austrian army. An agreement was soon reached with Maria Theresa. On November 15, the regiment set off from from Krakau for Hungary. It took its winter-quarters in the Comitates of Neutra (present-day Nitra/SK) and Trentschin (present-day Trenčín/SK).

In 1757, the regiment served with the Austrian army, a situation which persisted till the end of the war. On May 8, it joined Daun's Army to the south of Kolin. It was then attached to General Nádasdy's Corps, posted at Maleschau south of Kolin. On June 18, it took part in the battle of Kolin. It then consisted of 2 squadrons for a total of about 350 men. It was attached to Köbels' brigade in the corps of Count Colloredo, held in reserve behind the centre. The regiment was then moved to the right to fill a gap in the Austrian line near Krzeczhorz height. At the end of the afternoon, it was attacked by Normann Dragoons and routed. On September 7, when General Nádasdy attacked Winterfeldt's isolated corps during the combat of Moys, the regiment was part of Althann's Cavalry Brigade attached to the Corps de reserve of the Duke von Arenberg which has probably not participated in the engagement. The regiment was then attached to the corps of FZM Marschall posted at Lauban (present-day Luban) to protect Lusatia. At the end of September, 96 carabiniers led by Captain Johann Gottlieb von Bülow participated in the raid on Berlin. The regiment took its winter-quarters near Welwarn (present-day Velvary/CZ).

On January 11 1758, the regiment went to Raudnitz (present-day Roudnice/CZ). In April, it went to Moravia where it effected a junction with the 3 Saxon Chevauxlegers regiments. In early May, during the Prussian invasion of Moravia, the regiment was part of the cavalry corps of De Ville which had taken position at Wolschan (present-day Olšany). After the relief of Olmütz, the regiment was part of the troops who followed the retreating Prussian army up to the border of Bohemia. The regiment was then transferred to de Ville's Corps stationed near Troppau (present-day Opava/CZ). It served with this corps until September when it was transferred to Harsch's Corps who tried to capture the Fortress of Neisse. However, Frederick came to the relief of his fortress and Harsch was forced to retire to Moravia. The regiment took its winter-quarters around Teschen (present-day Cieszyn/PL).

At the beginning of 1759, the regiment counted between 807 and 813 men. In April, it was part of the Austrian forces who advanced against Fouqué's Corps posted near Heidenplitsch (present-day Bílčice/CZ), driving him back to Zuckmantel (present-day Zlaté Hory/CZ). The corps then encamped between Troppau (present-day Opava/CZ) and Jägerndorf (present-day Krnov/CZ). On 1 June, a part of de Ville's Corps (including the Saxon Chevauxlegers) went to Johannisthal (present-day Janoušov/CZ). In July, de Ville's Corps was sent to Bohemia to defend the country against General von Wedell who already occupied Trautenau (present day Trutnov/CZ). De Ville's and Harsch's corps then made a junction near Trautenau and marched on Landeshut in Silesia, the Saxon cavalry under Major-General Zezschwitz forming the vanguard. On 18 July, their camp at the Grüsau Monastery (present day Krzeszow/PL) was attacked by Fouqué's troops who were driven back. After some skirmishes, Harsch and de Ville returned to Trautenau. De Ville then marched to Saxony, leaving the Saxon cavalry with Harsch's Corps posted in the Riesengebirge (present-day Krkonoše/CZ). At the end of November, FML Daun recalled the Saxon cavalry to Saxony. The regiment marched by Schlukenau (present-day Šluknov/CZ) and Neustadt. It took its winter-quarters near Stolpen in Saxony.

In early June 1760, the regiment was attached to FZM Lacy's Corps operating on the east bank of the Elbe. The Saxon cavalry concentrated near Meissen on the east bank of the Elbe before moving to Radeberg. Lacy then marched towards Silesia closely followed by Frederick who turned back near Bautzen, heading towards Dresden. On July 9 at 1:00 a.m., Lacy left Göda. He first retreated to Bischofswerda, then westward at an extraordinary rate, hurrying towards Dresden and the Reichsarmee. Lacy finally halted on the Height of Weissenhirsch, within 3 km of Dresden. Frederick marched by Bischofswerda to Harta (probably Grossharthau). He vainly sent his cavalry to catch up with Lacy. Frederick then undertook the Siege of Dresden but had to abandon it. Both armies marched towards Silesia again. On August 15, at the Battle of Liegnitz, the regiment was with the Austrian main army who did not take part in any action. On September 17, the regiment was present at the Combat of Hochgiersdorf. On November 3, the regiment took part in the bloody Battle of Torgau where it covered the retreat of the Grenzer light troops, suffering heavy casualties from the Prussian artillery. As part of Brentano's Corps, the regiment then drove Kleist's troops out of Klingenberg where it took its winter-quarters.

Early in 1762, the regiment participated in a raid conducted by the Duke of Lobkowitz against Prussian outposts near Audigast and Groitsch. It was later attached to Maquire's Corps posted near near Dippoldiswalde as part of the Austrian army operating in Saxony. At the end of June, the entire Saxon cavalry corps was sent to the border between Saxony and Bohemia. On 2 July, part of the regiment posted at Böhmisch Einsiedel (present-day Mníšek/CZ) was surprised and taken prisoners by a Prussian detachment under Major-General von Kleist. Lieutenant-General von Gösnitz argued that the horses, lacking fodder since 14 days, were too exhausted to allow the Carabiniers to escape. In November, the regiment encamped near Fischbach while Lieutenant-General von Gößnitz's headquarters were established at Putzkau. The Saxon cavalry was in very poor conditions due to constant campaigning and bad financial situation (troopers were unpaid for months). Uniforms were in rags and troopers exhausted. 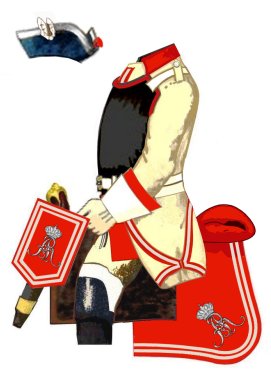 Troopers were armed with a sabre and a musket. A black breastplate was worn under the coat. 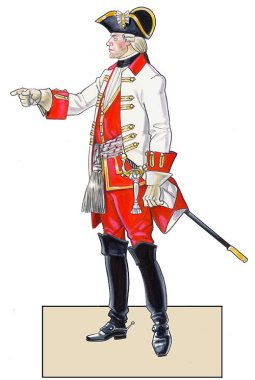 Corporal golden tresses on the cuffs, none on their lapels. Officers had broad gold laces on the collar. Officer's schabraque red with gold laces, the kings initials AR and crown.

Karabiniergarde Musicians - Source: Ibrahim90 from a Not By Appointment template

Trumpeters and kettle-drummer wore red coats with white collar, cuffs and turnbacks, brass buttons; white laces decorated with two red velvet stripes; on each side of the coat front, 6 laces (white with two red stripes) placed in 1-2-3 (some sources give no lapels).

Trumpets were silver for parade and brass for service duty with red-gold cords. The regiment carried the captured silver kettledrums from the Prussian Holstein-Gottorp Dragoons, captured December 13, 1745 at Zehren.