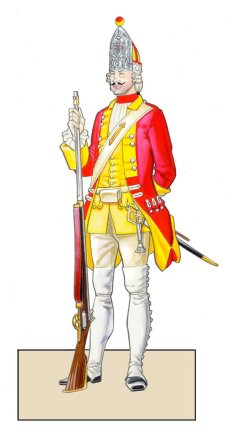 Raised 1729 with contributions from the infantry regiments under the name Grenadiergarde of king Augustus II. The I. bataillon in Poland, the II. in Meissen/Saxony. One bataillon partipicated in the 1733-1735 campaigns in Poland. 1737-1740 it was united with the Graf Brühl regiment and now entitled Königliche Leibgarde zu Fuß [Royal Foot Life Guards]. From 1743 carries the name Leibgrenadiergarde. One bataillon joined the campaigns of 1741 and 1742, and the entire regiment the one of 1745. January 1746, after the battle of Kesseldorff, the so entitled Hubertusburg grenadier company, and count Promnitz Free-Company of Grenadiers were incorporated. 1756 it became prisoner at Pirna. The entire regiment had been distributed among the Prussian infantry, for the the men refused to take the oath on the king of Prussia. 1757 the Referenten of this regiment were rallied in Hungary and partipicated in all campaigns along with the French Armies till 1763. After the peace settlement of Hubertusburg the regt. was reraised from the veterans, a newly Warsaw raised bataillon, and this regts. detachment, that served on the [neutral] fortress Königstein for the duration of the war. It reformed in 3 bataillons with 14 coys. In 1764 it was reduced to 2 bataillons with 10 coys.

1756 état with 14 grenadier coys formed in 2 bns and 2 flank grenadier coys with some 1,684 men. In 1757 the regiment had not been reformed. The grenadiers, instead, served as the grenadier coys of Garde, Prinz Maximilian, and Prinz Joseph, as part of the Saxon auxilliary corps in French service.

At the end of August 1756, when Frederick II launched the invasion of Saxony, the regiment retired to Pirna with the rest of the Saxon army. At Pirna, the regiment was deployed on the right wing under von Rochow, as part of von Stolberg's Brigade. The Prussians blockaded the Saxon army in Pirna from September 9 until October 15 when the Saxons finally had to surrender. 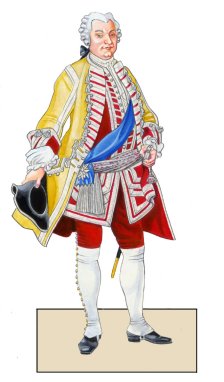