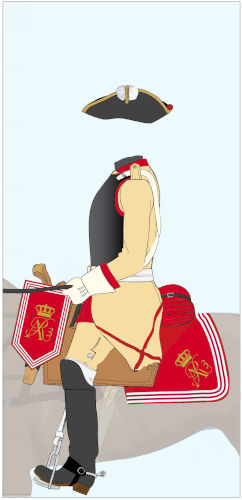 Leibstandarte: white damask field heavily embroidered in gold with silver piping, centre device consisting of a gold shield of ornate design carrying the Royal Polish arms (white eagles and white knights on a red field) and on the centre the arms of Saxony beneath the electoral hat, surmounted by a crimson royal crown and surrounded by green palm leaves. Fringe in gold (buttons color).