In 1748, when Wilhelm inherited the County of Schaumburg-Lippe, he immediately began to increase the “Leib-Grenadier-Kompagnie,” which previously counted 70 men (including elderly and invalids, and excluding officers). By October 1749, the company counted 114 men, excluding officers; and by April 1751, 218 officers and men.

In February 1754, the “Garnison-Bataillon Bückeburg” was increased to four companies for a total of 407 men, including officers. In November, a fifth company (a grenadier company) was added to the unit. By September 1755, these five companies of approx. 100 men each (for the first time four of these companies are designated as fusiliers) totalled 465 men, including officers. About 85% of the NCOs and men came from the Principality of Schaumburg-Lippe, while most officers came from other German principalities, France, Hungary, Slovenia and Switzerland.

In April 1756, the five companies of the “Garnison-Bataillon Bückeburg” counted 477, including officers. In August 1756, Count Wilhelm zu Schaumburg Lippe signed a subsidies contract with Hanover by which he agreed to supply an infantry regiment (the present regiment aka “Leibbataillon”, “Fusilier-Regiment” or “Schaumburg-Lippisches Leib-Regiment”) to the Allied army. This regiment was organised in a single battalion of seven companies, each of 114 men, as other Hanoverian infantry regiments. The garrison battalion contributed a large number of men to the new regiment but additional troops had to be raised to meet this commitment. Furthermore, Count Wilhelm kept two companies: the “Leibgrenadierkompagnie” (Captain von Pastelberger) and another grenadier company (Lieutenant von Zielberg), in his own service, designating them as the “Grenadier-Garde.”

According to the subsidies contract, the battalion, including the Begleitartillerie (accompanying artillery to serve the battalion guns), was the only unit that had to be provided making a total of 800 fusiliers and 28 artillerymen, for a grand total of 828 men. However, Count Wilhelm was allowed to bring with him the 2 companies of his Schaumburg-Lippe-Bückeburg Grenadier-Garde and his Carabiniercorps, which would remain at his own disposal.

The regimental Inhaber was: Count Wilhelm zu Schaumburg Lippe, but the unit was commanded by:

On September 5, 1763, the battalion was reduced to four companies.

Somewhere during this period, the regiment was renamed “ Grenadier-Regiment.”

On February 17, 1787, the regiment was disbanded. Its officers were released from their oath and, for the most part, transferred to the Hessian service.

On April 24, 1757, the regiment marched to join the Allied army campaigning against the French in Western Germany. On July 26, the regiment took part in the Battle of Hastenbeck where it was deployed in Block’s Brigade, in the first line of the right wing.

By March 1758, the regiment consisted of 7 companies for a nominal strength of 800 men but fielding only 675 men, including officers:

On June 18, 1758, the regiment was part of Wangenheim's Corps who passed the Rhine at Duisburg. On June 23, the regiment took part in the Battle of Krefeld where it was deployed on the right wing under the command of the Hereditary Prince of Brunswick. Along with the Hessian Wutginau and Prinz Karl regiments, it drove off a French cavalry attack. On October 10, it took part in the Battle of Lutterberg where it was deployed in Zastrow's Brigade in the first line of the centre. During the night of October 10 to 11, as part of the rearguard, the regiment drove back French hussars, who were pursuing the retreating Allied army. In December, when the Allied army took up its winter quarters in Westphalia, the regiment was quartered in the Bishopric of Paderborn.

By December 1758, the seven companies were at full strength (114 men each, including officers).

In June 1759, the regiment was part of Imhoff's Corps operating in Hesse. On July 22, during the French offensive in western Germany, Wangenheim's Corps, now numbering some 10,000 men, took new positions near Minden with the Bückeburg Infantry encamped near the windwill before Petershagen. On August 1, the regiment took part in the Battle of Minden where it was deployed in Wangenheim's Corps between Kutenhausen and the Weser, in the first line of the infantry centre, escorting the Schaumburg-Lippe-Bückeburg detachment of Artillery.

On July 16, 1761, the regiment was present at the Battle of Vellinghausen, where it was attached to the infantry of the central corps.

At the end of the war, the regiment served as an occupation force in Minden. On January 27, 1763, it marched from Minden to return home. The staff and five companies were initially billeted in Stadthagen, while two companies were quartered in Hagenburg. In September, after the reduction of the regiment, the four remaining companies were stationed in the Fortress of Wilhelmstein in Bückeburg, and in Blomberg, Schieber, and Alverdissen.

Somewhere after 1762, the fusiliers became musketeers and their uniforms changed slightly: the collar disappeared and the cuffs were changed to blue.

Hereafter, we present tentative reconstructions of the colours of Schaumburg-Lippe-Bückeburg Infantry at the time of the Seven Years' War. It is mentioned that, during this period, the regiment carried two colours: a light blue and a light red.

Warning: these tentative reconstructions are still work in progress and may be modified again.

To recontruct these colours were made several assumptions:

Since the crown above the arms first appeared on coinage only in 1762, it is possible that the centre device might have been surmounted by a knight helm instead of a crown. For this reason, we propose two different versions of each colour. We also assumed that the light blue colour was the Leibfahne and the light red was the Regimentsfahne, but it could be the opposite. 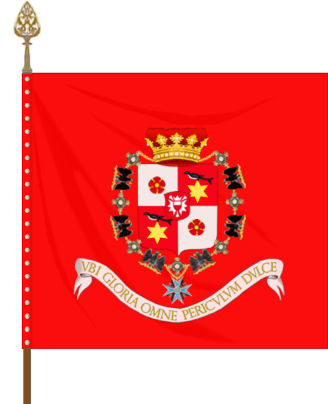