The Fusstrabanten or Foot Guards (the term Trabant, plural –ten, was used in Sweden, to indicate a guard on foot armed with halberd) of the Saxon Elector had a long history. Their title changed during the ages several times. A small unit of 20 men entitled Oberguardia was raised in 1555. In 1569 the unit was reinforced up to 58 men. This number was doubled up to 112 men in 1669 but later reduced by half, for economy, in 1670.

In the following years, the strength of the Trabanten remained relatively unchanged.

The Trabanten-Leibgarde zu Fuss (Foot Bodyguard) changed name on May 24th 1725 after a royal order (the elector was at that time King of Poland).

H.R.H. King August “the Strong” was an admirer of King Louis XIV and consequently the Saxon Trabanten were re-modeled after the French Cent-Suisses aka as the “Hundred-Swiss”, the personal Swiss Bodyguards of the French King.

The unit was entitled Schweizer Leib-Garde (Swiss Bodyguard). At the mean time, the rank of the commander of the unit, the Trabanten-Hauptmann (Captain of the Trabanten) was changed in Schweizer-Hauptmann (Swiss-Captain).

The first officer appointed as Swiss Captain was a Frenchman native of the Beaujolais, his name was Pierre Brohenques. He entered the Saxon service after a period spent in French service. He moved to Warsaw on May 24th 1726 and married Mademoiselle de Barques, an illegitimate daughter of the elector. Then in 1725, he visited Paris for the marriage of the French Dauphin Louis XV with the Saxon Princess Maria Lezynska.

The Swiss Lifeguards were not only deputed to the security of the royal family but were also in charge of the surveillance of the Dresden Residential Caste and of the inestimable treasures it contained.

The captain was deputed to the strict control of the unit. He had to visit periodically the watch posts in person or throughout subaltern officers. None was admitted, without permission, inside the royal palace and, most of all, into the royal apartments. The Guards had to check for perfect order inside each apartment and to refer to the civil deputies about eventual problems.

The captain was responsible for the discipline and for the selected recruitment of the unit. However, he had no power to dismiss anyone of the personnel without the consent and permission of the elector himself or, in his absence, of the grand-marshal.

The captain was the keeper of the keys of the palace. He had to take the keys with him every day and he was allowed to pass them to a subaltern officer on service only at the time of the closing of the doors. He could never leave the palace without a written permission nor without leaving a substitute.

The unit was also in charge of the early warning in case of fire. The danger of a fire in a structure built mainly of wood was a real one. In 1701, a fire destroyed a large part of the Residenzschloss or Residence, in particular the Georgenbau, which was soon rebuilt in Baroque style by August the Strong. The Langer Gang, a long arcaded open structure connecting the Johanneum with the Georgenbau, was also repaired.

In case of fire, the guards should alert their superiors and the elector himself. They should be able to refer carefully about the ongoing problem and be prepared to receive orders.

In order to protect the safety of the elector, the Swiss Lifeguards had to be always ready to refer about every unusual event happening inside the palace.

To accomplish his duty, the effective strength of the corps was augmented. By an express order of the elector, the personnel had to be of Swiss nationality, good complexion and high stature. The recruitment of the Swiss encountered some difficulties and a mission was sent to Switzerland, at first to the St-Gallen Canton and then to Bern and Fribourg. In a letter, the king/elector explained that he was indifferent about the exact provenience of the personnel but, the unit had to be completed for the autumn of 1730.

The sum of 1,200 Thalers from the Generalkriegskasse was granted to the administration of the unit for the raising this same unit. The sum included 126 Thalers for two NCO as captain assistants (the newly introduced rank was entitled archer).

The monthly cost for the unit was 1,000 Thalers.

For service, the unit could split into six detachments of 30 men under an officer. When smaller detachments were required, 20 men were put under the command of an NCO (Wachtmeister) and 12 men under a (Rottmeister). For the ordinary service at palace, or Wachtdienst (guard-service), a division (Abteilung) consisting of two detachments was required.

This way, every day, an officer, 2 Rottmeister, 1 drummer, 1 fifer, 32 Swiss guards, 4 carpenters and 8 oboists were on guard duty.

On parade, 2 more drummers were added.

Normally eleven posts were watched by the Swiss in the Palace of Dresden these posts were increased to twelve when H.M. added two new rooms to the Residential Castle: 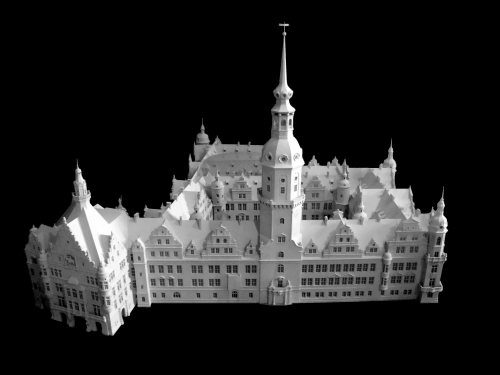 Model of the Dresden Residential Castle - Source: User Dresdenbell of the English Wikipedia

A detachment was present at every crowning ceremony of the Holy Roman Emperor in Frankfurt am Main. The Swiss Bodyguards did not participate in the summer camp of Zeithain in 1730. A detachment was in service as escort to the Royal Prince Residential Castle.

Throughout its history, this unit had the following commanders:

Thaddeus de Meagher entered the service of the King of Poland and Elector of Saxony in the year 1734. According to the muster roll (Archives of the Royal Saxon War Office, Dresden, n. 450 I.A.) of the staff of the first battalion of the Lifeguards (?), he was native of Ireland and at that time 44 years old. Before entering the Polish-Saxon army, he had served in France.

In year 1739, Meagher was appointed chamberlain to the king by letters patent translated hereafter:

“We, by the grace of GOD, Frederick Augustus, King of Poland, Duke of Saxony, Julich, Cleves, Berg, Enger and Westphalia, Elector… Dear and faithful councilors, whereas we, on the 27 of this month have appointed THADEE DE MEAGHER Lieutenant-Colonel of our Foot Body-Guards to be our Chamberlain from special and on account of his good qualities and valiant services heretofore rendered Us, Now We, herewith graciously require that you will in future on all occasions which present themselves treat and style him accordingly… Thereto accords Our Will and Pleasure. We remain graciously your affectionately.

On July 1st 1740, Thaddeus was promoted to the colonelcy of the 1st Battalion of Foot Body Guards

On September 7th 1742, he became captain proprietor of the Swiss Guards.

De Meagher died in May 1765 at Dresden. He had no heirs and Lieutenant-Colonel von Brown inherited his legacy.

“Now His Royal Highness has resolved not to fill up the past of Swiss Captain and to employ the salary attached to that past of 110 Thalers 12 Groschen per month for payment by installments of the above-mentioned sum assured to the deceased Lieutenant-General de Meagher amounting altogether to the sum of 4,000 thalers. His Royal Highness accordingly ordains that until this claim has been satisfied, the said 110.12 shell be handed over by the said Swiss Guards to Lieutenant-Colonel von Brown against his receipt and by virtue of these presents be passed in his accounts. Furthermore Major-General Count van der Horst shall in future take charge of the Swiss Guards as Captain-General and draw from the Electoral Treasury against his receipt 1,000 thalers per months, appropriated for the maintenance of the said Guards, and apply it in manner as here fore, but shall keep proper account of it until further order.

Given under H.R.H Own hand at Dresden May 22nd 1765. Signed Xaverius. Count von Einsiedel. (extract from Some historical notices of the O`Meaghers of Ikennin, New York 1890).

The unit was a palace guard and did not take part in any campaign or battle.

The high costs of the uniforms were paid apart. The German uniform (Deutsche-Montur) was to be renewed every three years. The Schweitzer Gala-Montur was changed every six-eight years with an expense of 6,000 to 7,000 Thalers for the German and another 10,000 Thalers for the Swiss-gala Uniform. At every change, also officers had to renew their uniform. They received an indemnity amounting to between 230 and 270 Thalers, for the service uniform and 500-600 Thalers for the gala uniform.

In 1725 the Swiss Lifeguards received two uniforms, the first for parade and the second for service.