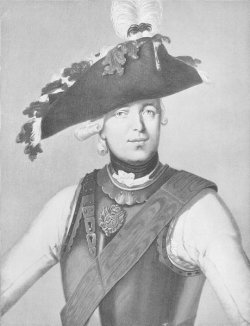 Friedrich Wilhelm was the son of Daniel Florian Baron von Seydlitz, a captain in the Prussian dragoon regiment von Sonsfeld stationed at Calcar-am-Niederhein in the Duchy of Cleve. His mother was Luise von Tugendreich. The family came from Mecklenburg-Schwedt, a territory belonging to Sweden.

In 1735, at the age of fourteen, Seydlitz went as a page to the court of Margrave Friedrich Wilhelm of Brandenburg-Schwedt who had been his father's colonel. Here he acquired a superb mastery of horsemanship as well as a love of tobacco, alcohol and women. Many stories are told of his feats as horseman, the best known of which was his riding between the sails of a wind-mill in full swing.

In 1740, Seydlitz was commissioned a cornet in the Prussian Markgraf Friedrich von Brandenburg Cuirassiers. During the War of the Austrian Succession, he served as a subaltern under Colonel von Rochow.

On May 20, 1742, Rochow's cuirassiers were entrenched in Kranowitz near Ratibor. Rochow, learning that some 6,000 Hungarian irregulars were approaching the town, sent Seydlitz with 30 men to hold a village in front of his position. The Hungarians soon attacked Seydlitz's small force in overwhelming number. Prussian reinforcements were repulsed and Seydlitz was progressively surrounded by enemies and forced to surrender. He was imprisoned in the Fortress of Raab. When Frederick II heard of his gallant conduct, he offered to exchange an Austrian captain for him. Accordingly, the exchange took place on June 11.

In 1743 the king made Seydlitz a captain in the 4th Hussars (von Natzmer's White Hussars). Seydlitz brought his squadron to a state of conspicuous efficiency.

In October 1744, after the end of the First Silesian War, the Natzmer Hussars took their winter-quarters in the City of Trebnitz. Soon, war broke out anew and the regiment, under Lieutenant-Colonel Schutz, was assigned to the vanguard of a force under Lieutenant-General Nassau.

On May 22, 1745, the Natzmer Hussars attacked an Austrian force entrenched in the town of Katolische-Hennersdorf near Landshut. After an initial success, they were defeated by Austrian hussars. On June 4 at the Battle of Hohenfriedberg, the regiment was placed on the right wing of the Prussian army. During the battle, Seydlitz captured the Saxon General von Schlichting. Soon after, he was promoted major. On September 30 at the Battle of Soor, Seydlitz was wounded by a ball in the left arm. Later during the same year, Seydlitz and Warnery surprised the Austrian rearguard under Count von Burghausen near Zittau and routed them.

After the Second Silesian War, the Natzmer Hussars returned to their quarters at Trebnitz. Peacetime was used to improve the general quality of the Prussian cavalry. It is probably during this period that Seydlitz acquired syphilis.

On September 21, 1752, due to his merit, Seydlitz was promoted to the rank of lieutenant-colonel in the Vippach Hussars (formerly Natzmer's Hussars). On October 13, Frederick reassigned him as commander of the Württemberg Dragoons, stationed at in Treptow an der Rega, to improve their performance.

On March 1, 1753, Seydlitz was promoted once more, assuming the command of the Rochow Cuirassiers which soon became a reference in the Prussian army. 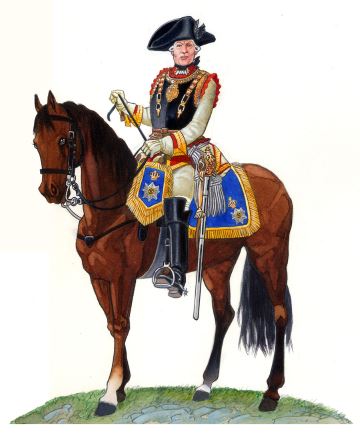 In 1756, at the beginning of the Seven Years' War, the Rochow Cuirassiers took part in the invasion of Saxony. They were assigned to the column led by Ferdinand of Brunswick who advanced upon Pirna via Halle and Leipzig. Once that the Saxon Army was blockaded in Pirna, Seydlitz's regiment was attached to the army of Frederick who marched towards the Bohemian border to intercept an Austrian relief force led by Field-Marshall Browne. On October 1, the two armies clashed in the Battle of Lobositz. Seydlitz at the head of his 5 squadrons took part in the second Prussian charge which, after initial success, was broken up. Seydlitz almost got captured but was saved by one of his cuirassiers. The Prussian infantry finally won the day.

In 1757, Seydlitz was attached to the advanced guard of the column of Prince Moritz of Anhalt-Dessau. During this campaign, he was under command of General Zieten. On May 6, Seydlitz's regiment did not take part in the Battle of Prague because it was stationed on the opposite side of the Moldau River. After the victory, Seydlitz's regiment followed Frederick who marched to intercept an Austrian relief army under the command of Field-Marshal Daun. On June 18 at the Battle of Kolin, Major-General von Krosigk's heavy cavalry brigade was ordered to support the faltering Prussian line. This brigade consisted of the Prinz von Preußen Cuirassiers (5 sqns), the Rochow Cuirassiers (5 sqns) and part of the Normann Dragoons (5 sqns). Krosigk was killed during the fight and Seydlitz assumed command of the entire brigade. He counterattacked the Austrian troops who were pursuing the defeated units of General Pennavaire's Brigade. Seydlitz's charge broke the Herzog Württemberg Dragoons, the Saxon Karabiniergarde, and Haller Hungarian infantry. It also pushed back Baden-Baden Infantry and Deutschmeister Infantry. However, the charge soon exhausted itself and the Prussians abandoned the field under cover of the brigades of Seydlitz and Zieten. On June 20, Frederick II promoted Seydlitz to major-general and gave him the order "Pour le mérite". During the retreat of the Prussian army from Bohemia, Seydlitz led his cavalry brigade into four engagements.

By September 1757, Frederick's army was back to Saxony to oppose the advance of a Franco-Imperial Army under the joined commands of Soubise and Hildburghausen. On September 19, Seydlitz with some 1,800 men surprised a superior force of 6,000 infantry and 4,000 cavalry in Gotha. On the morning of November 5, before the Battle of Rossbach, Frederick placed Seydlitz at the head of his entire cavalry (38 sqns), thus superseding two more senior generals. The role of Seydlitz in the ensuing battle was decisive. The Franco-Imperial managed to contain the charge of his first line (15 sqns) but Seydlitz immediately launched another charge with his second line (18 sqns) routing the Franco-Imperial cavalry. Seydlitz then quickly rallied his squadrons north of Reichardtswerben, advanced to Tagewerben and launched a decisive assault on the infantry routing it and winning the day for Prussia. Seydlitz was wounded in an arm during this battle. He left the army to look after his wound which, because of his syphilitic condition, was slow to heal. On November 20, Seydlitz received the Order of the Black Eagle and was promoted to lieutenant-general.

In 1758, Seydlitz was back to the army. On August 25 at the Battle of Zorndorf, he assumed command of the left wing cavalry. He refused to obey the initial orders given to him by Frederick and awaited the proper moment to launch a cavalry charge against the advancing Russians. His cavalry quickly routed the Russian horse, then rallied and charged the Russian infantry, failing to break it. Seeing this, Seydlitz reformed his cavalry behind Zorndorf, waiting for a better moment to attack. Then, when all seemed lost for the Prussians, Seydlitz led 61 squadrons against the Russian cavalry, pushing it back into the marshes of Quartschen. Then, he came back to the rescue of the Prussian infantry, forcing the Russians to fall back.

During the night of October 13 to 14 1758, during the Battle of Hochkirch, the Austrians surprised the Prussian army in its camp who barely escaped, covered by the rearguard under Seydlitz.

On August 12, 1759, at the Battle of Kunersdorf, the Prussian army faced an Austro-Russian army. Seydlitz and the Prince von Württemberg swung the cavalry of the left wing around the ponds near Kunersdorf. However, they soon realized that this was not a good ground for cavalry and stopped. Frederick repeatedly ordered Seydlitz to charge. The latter finally obeyed and was wounded during the unsuccessful charge. After the battle, Seydlitz was transported to Berlin to look after his wound.

On April 18, 1760, during his convalescence, Seydlitz married Susanna Albertina, Countess von Hacke. In May, he rejoined Frederick at Meissen even though he had not completely recovered from his wounds. Seeing his condition, Frederick sent him back to Berlin. In early October, a small Russian corps under General Todleben crossed the Oder and threatened Berlin. Seydlitz opposed any withdrawal. At the head of an improvised force, he routed some Cossacks near Kopenick. However, the arrival of Austrian reinforcements obliged the Prussians to abandon Berlin and to withdraw to Spandau. Finally, the Austro-Russian corps had to retire.

In 1761, Seydlitz finally resumed active service. On May 20, he reported for duty to Prince Henri in Saxony. He received an independent command composed of troops of all arms. It was the first time that he had other arms than cavalry under his command and many doubted his ability in such a role. He often operated along with Freikorps von Kleist. On August 25, Seydlitz, led 15,000 horse and several infantry battalions by Deutsch-Bohra and Ditmannsdorf, to Nanendorf. On August 26, he attacked the Austrians but only managed to take a few prisoners. He made two other fruitless attempts against the Austrians on September 2 and 4. In October, Seydlitz with 2,000 infantry and 1,200 cavalry, was sent towards Halle to stop the French advance on Magdeburg.

In 1762, Seydlitz took command of a division of Prince Henri's army. On May 12, he took part in the storming of the Mulda River. From September 27 to 29, Prince Henri stopped several Austian counter-attacks along the river. On October 14 and 15, the Austrians concentrated their attacks on the Prussian right wing. Seydlitz was forced to retire after loosing 2,000 men and 10 guns. On October 16, Prince Henri had to retire to Reichenbach. Then on October 29, Prince Henri counter-attacked the Austrians at the Battle of Freiberg. Seydlitz commanded the right wing. He led a decisive bayonet charge at the head of two of his grenadier battalions against the Dreikreuzer Heights. Soon the Austro-Imperial army was retreating across the Mulda to Frauenstein.

After the Peace of Hubertusburg, Seydlitz was made inspector-general of the cavalry in Silesia where 11 regiments were permanently stationed. The most promising cavalry officers were systematically sent to Silesia to be trained by him.

On July 29, 1767, Seydlitz was made a general of cavalry. His later years were clouded by domestic worries. His wife was unfaithful to him and his two daughters, each several times married, were both divorced, the elder once and the younger twice. Furthermore, he had a disagreement with Frederick which put an end to their friendship.

During his last illness, Frederick II visited him a last time. Seydlitz died of paralysis at Ohlau on November 8, 1773.