The regiment was created on September 19, 1684 and took the name of the province of Soissonnais. Indeed, expecting a Coalition to soon form against France, Louis XIV raised 30 new regiments from September 1 to 30 for the defence of the various places of the realm. By raising one regiment a day, he avoided any problem of precedence among these new regiments. The regiment was given to N. de Goyon-Grimaldi, Duc de Valentinois.

From 1742 to 1744, during the War of the Austrian Succession (1740-48), the regiment served in Flanders. In 1745, it took part in the sieges of Tournai, Oudenarde, Termonde and Ath. In 1746, it was transferred to Provence. In 1747, it took part in the Combat of Exiles where its colonel was killed. It then served in the Alps until the end of the war.

During the Seven Years' War, the regiment ranked 88th and was under the command of:

In 1756, the regiment took part in the expedition against Minorca and in the capture of the British Fort St. Philip. After the conquest of the island, the regiment returned to France.

From 1757 to 1762, the regiment was stationed on the coasts of Languedoc to protect this province against British amphibious expeditions. 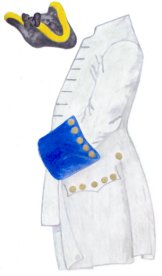